The Chargers have claimed wide receiver Rasheed Bailey off waivers from the Jaguars, according to Adam Caplan of ESPN.com. To make room for Bailey, San Diego has waived/injured fellow wideout Rico Richardson (Twitter links). 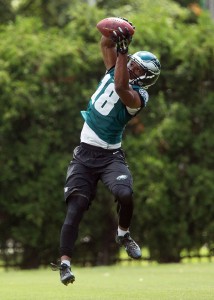 Jacksonville waived the 23-year-old Bailey on Tuesday after he originally hooked on with the organization last October. The 6-foot-1, 209-pounder went undrafted out of Delaware Valley a year ago and also spent time with the Eagles, though he didn’t garner any regular-season experience with either them or the Jaguars. Previously, Bailey racked up 10 receptions for 100 yards and a touchdown with the Eagles last preseason.

Between his stints in Philadelphia and Jacksonville, Bailey was a member of the BC Lions of the Canadian Football League for two weeks in October. That ended when the Jags signed him to their practice squad. He’ll now try to earn a spot with the Chargers, whose depth chart at wideout features Keenan Allen, Travis Benjamin, James Jones and Dontrelle Inman, among others.

Richardson, meanwhile, is primed to look for work yet again, having already been a member of five organizations since going undrafted from Jackson State in 2013. The 25-year-old signed with the Chargers on Aug. 8, but an injury in practice kept him from attempting to make a mark with the club. Richardson has appeared in six games, all with the Titans from 2014-15, but he hasn’t recorded any stats.

NFL’s 2016 free agent period doesn’t officially open until March 9th, but players who didn’t finish the season on a roster – or who have since been cut – are free to work out with teams and sign contracts right away. Aaron Wilson of the Houston Chronicle has several updates on those free agents who are visiting and/or auditioning for NFL teams, so let’s round up the latest: