The Jets announced that they have waived/injured wide receiver Devin Smith. In related news, the team re-signed receiver Deshon Foxx. 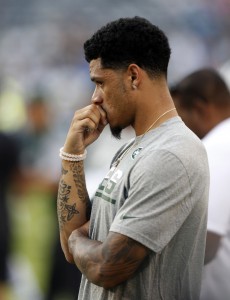 Smith tore his ACL in the first team workout of the year, ending his 2017 season before it could begin. He tore the same ligament during his rookie season in 2015, meaning that the former second round pick has been on the field for just 14 games in total. It’s fair to wonder whether Smith will be able to get back on track after suffering the same serious injury twice.

In his limited action, Smith has caught ten passes for 135 yards and one score. If he clears waivers – and he probably will – then he will revert to the Jets’ IR.

Even with Smith out of the picture and Jalin Marshall facing a four-game ban, Foxx still faces long odds of making the 53-man roster. The Jets have 13 receivers on the 90-man roster, including Eric Decker, Quincy Enunwa, free agent pickup Quinton Patton, and 2017 draft picks ArDarius Stewart and Chad Hansen.

The Seahawks’ release of veteran defensive back Brandon Browner had already been reported, but now the club has officially confirmed the move, along with announcing several other transactions that moves their roster to 84 players. Seattle has until 3pm tomorrow to get to 75 men.