There were no arguments from any of the Cardinals’ hierarchy regarding the decision to release wide receiver Michael Floyd on Wednesday, owner Michael Bidwill told Ian Rapoport of NFL.com. “Yes, across the board,” Bidwill said on whether cutting Floyd on the heels of his second DUI arrest was a consensus choice. In summing up Floyd’s nearly five-year tenure with the Cardinals, Bidwill said, “He was a 2012 first-round draft choice for us, a person we thought would eventually take Larry Fitzgerald‘s position and be the No. 1 receiver for the future. Deeply disappointing that we moved on and he didn’t work out as a person we had a lot of faith in.” 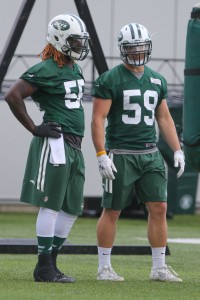 Bowman, a South Alabama alum, went undrafted earlier this year but ultimately agreed to a deal with the Jaguars. After being waived at final cutdowns, Bowman was claimed by the Jets, who subsequently cut him and re-signed him to their taxi squad earlier this week. If he’s added to the active roster, Bowman would serve as a third tight end behind Kellen Davis and Brandon Bostick while also likely playing on special teams.

Howsare, a former linebacker, has only played on 33 offensive snaps this season, as offensive coordinator Chan Gailey runs a spread attack that rarely employs a fullback. However, Howsare has been active on special teams, playing on half of the Jets’ ST snaps. It’s possible that he could be added to the practice squad, swapping spots with Bowman.