Brandon Brooks has enjoyed a bounce-back season for the Eagles, but the guard won’t have a chance to play in a nationally televised spot for his team tonight. 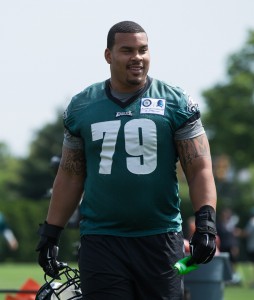 The mammoth lineman was hospitalized with an illness earlier today and will be out, leaving Philadelphia shorthanded up front.

Rated as Pro Football Focus’ No. 5 overall guard, Brooks has been one of the team’s best players this season after signing a lucrative free agent deal to come over from the Texans. The 343-pound right guard started all 10 of the Eagles’ games this season and has suited up for at least 14 contests during his time as a starter, which has consisted of the past three campaigns.

Philadelphia is already down Lane Johnson and replacement Halapoulivaati Vaitai, so the Eagles will go with a makeshift offensive line against the Packers. Stefen Wisniewski will start at left guard, Isaac Seumalo will go to right guard, per Tim McManus of ESPN.com (on Twitter) and Allen Barbre will play right tackle for Philly tonight.

Josh Andrews will be active for the first time this season, serving as the backup guard, with Matt Tobin suiting up as the backup tackle after being a healthy scratch last week, Zach Berman of the Philadelphia Inquirer tweets.

The Eagles are already without starting running back Ryan Mathews, so this rearranged blocking quintet will likely make ground advancement more difficult on the fourth-place team fighting to remain in the wild-card race.