The Browns claimed promising rookie running back Darius Jackson off waivers, Adam Schefter of ESPN.com tweets. The Cowboys dropped Jackson from the roster yesterday in order to make room for the return of Darren McFadden. 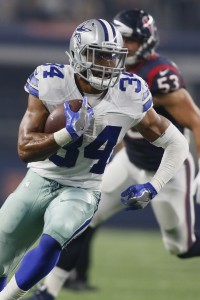 Jackson, a sixth-round pick out of Eastern Michigan, did not see playing time this year as he was buried behind talented backs like Ezekiel Elliott and Alfred Morris. The Cowboys were likely hoping to sneak Jackson through waivers this week and sign him to the practice squad, but word has been out on Jackson for some time now. If Jackson has been as solid in practice as coaches have been saying, then the Cowboys could come to really regret losing him.