Both Cromartie and Washington joined the Bills earlier this offseason, but they apparently became unnecessary to the organization in the wake of the draft. The Bills used their first-round pick on ex-LSU cornerback Tre’Davious White, thus helping to push Cromartie out. The team then spent its second-rounder on former East Carolina receiver Zay Jones, which spelled the end for Washington. Neither Cromartie nor Washington has accomplished much in the NFL, with the former having started in one of 21 appearances and totaling 18 tackles as a 49er from 2014-16; meanwhile, the latter’s only action came during a 14-game, five-catch 2014 with the Giants.

Like Cromartie and Washington, Roberson also carries a fairly unimpressive pro resume (and White’s selection didn’t do him any favors, either). Roberson first signed with the Bills last year and picked up a meager two tackles in seven games. He saw more time with the Rams from 2014-15, starting in six of 25 games and picking off his lone pass in the first of those two years.

The Bills announced that they have placed Eric Wood on injured reserve. To fill his spot, cornerback Marcus Roberson has been promoted off of the practice squad. In a related move, center Dalton Freeman has been signed to the p-squad.

Wood expressed hope last week that he could return if the Bills make the playoffs, but he’s either not healthy enough to do that or the 4-5 Bills felt that they needed the help at cornerback instead. Wood suffered a broken leg earlier this month and after the injury Rex Ryan lamented the loss of “the best center in the league.” While many would disagree with Ryan’s sentiment, it’s clear that he will be missed on the O-Line. Ryan Groy will likely continue in the starting center role.

Roberson was just promoted from the Bills’ p-squad in late October but lasted only one game before reverting back to the 10-man crew. Roberson will now resume his spot on the roster behind corners Stephon Gilmore, Ronald Darby, Nickell Robey, Kevon Seymour, and Corey White. 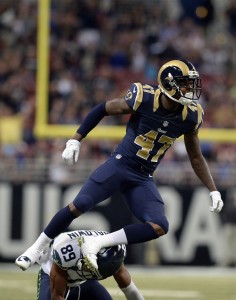 The Bills only filled one of their two open roster spots yesterday, and it looks like they’ll be using that final opening to add a defensive back. According to Joe Buscaglia of WKBW in Buffalo (via Twitter), the Bills have promoted cornerback Marcus Roberson from the practice squad. 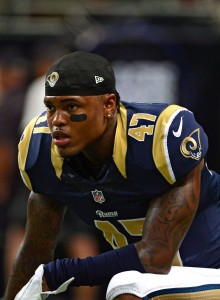 The former undrafted free agent out of Florida won’t be making his NFL debut, as the 24-year-old appeared in 25 games with the Rams between 2014 and 2015. In that time, Roberson compiled 34 tackles, seven passes defended, and one interception. Despite appearing in 16 games (with four starts) for the Rams last season, the team released the cornerback in early September. Roberson will join a deep cornerback corps that features Stephon Gilmore, Ronald Darby, Nickell Robey, Kevon Seymour, and Corey White.

Considering the injuries to the Bills’ wideouts, some believed the team would use their final roster spot on a receiver. However, Buscaglia believes top wideout Robert Woods must be healthy enough for this weekend, limiting the urgency to promote or acquire another receiver.