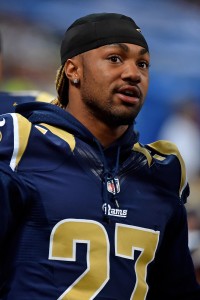 Rams running back Trey Watts has once again been suspended for violating the league’s policy on substances of abuse, according to Nick Wagoner of ESPN.com (via Twitter). After being banned for four games earlier this year, Watts has been suspended indefinitely for his latest violation.

Watts, who joined the Rams in 2014 as an undrafted free agent out of Tulsa, earned a spot on the club’s regular season roster in his rookie year. He didn’t see the field much, but the 24-year-old received a handful of offensive snaps, rushing seven times for 30 yards and catching three passes for 18 yards. Watts also contributed on special teams, recording seven tackles in kick and punt coverage.

When his first four-game suspension was announced this year, I speculated that it might cost Watts his spot on the roster, with Todd Gurley, Tre Mason, Benny Cunningham, and others in the mix in the Rams’ backfield. The team did cut Watts after he served his suspension, but brought him back to the practice squad, and promoted him to the 53-man roster again a couple weeks ago.

This time around, Watts will land on the Rams’ reserve/suspended list indefinitely, opening up a spot for St. Louis to add a new player to its roster.

Rams running back Trey Watts has been suspended for the first four games of the 2015 season, the NFL announced today, according to Adam Caplan of ESPN.com (Twitter links). Watts’ ban stems from a violation of the league’s policy on substances of abuse.

Watts, who joined the Rams just over a year ago as an undrafted free agent out of Tulsa, earned a spot on the club’s regular season roster for 2014. He didn’t see the field much, but the 24-year-old received a handful of offensive snaps, rushing seven times for 30 yards and catching three passes for 18 yards. Watts also contributed on special teams, recording seven tackles in kick and punt coverage.

Watts’ suspension may ultimately lead to his release, since his hold on a roster spot for 2015 already appeared to be precarious. In addition to first-round pick Todd Gurley, the Rams are also carrying Tre Mason, Benny Cunningham, Isaiah Pead, and multiple undrafted rookies.

A handful of ESPN’s NFC writers were kind enough to give us some reading material on this holiday. Let’s take a look at some interesting notes from those articles…