With Sam Darnold doubtful for tomorrow’s contest against the Bills, the Jets are added a reinforcement. ESPN’s Field Yates reports (via Twitter) that New York is planning on promoting quarterback Davis Webb from the practice squad.

The Jets followed through with the move. Webb is back on a New York active roster. Gang Green placed tight end Neal Sterling on IR to make room for Webb, per the New York Post’s Brian Costello (on Twitter). 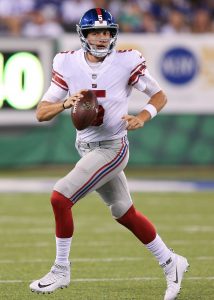 Darnold is currently dealing with a foot sprain that was already expected to sideline him for this weekend’s game. The Jets have a Week 11 bye, but there isn’t a lot of optimism that the rookie quarterback will be back in time for the team’s Week 12 matchup against the Patriots. In that case, Darnold could end up being sidelined until the beginning of December. Barring some unexpected signing, the Jets will surely roll with veteran Josh McCown as their starter until Darnold is healthy.

Webb certainly has the draft pedigree to earn some snaps, but he hasn’t been able to put it together as a professional. The 2017 third-rounder didn’t end up seeing the field as a rookie for the Giants, although there were rumblings that he was going to eventually replace Eli Manning. However, plans changed when the Giants fired both head coach Ben McAdoo and general manager Jerry Reese.

While Webb seemed to have the support of interim coach Steve Spagnuolo, he was seemingly on the outside looking in when the team hired Pat Shurmur. The Giants ended up waiving Webb at the end of the preseason, and he subsequently caught on with the Jets practice squad.