The Cowboys have used a second round tender on restricted free agent defensive tackle David Irving, according to David Moore of the Morning News (on Twitter). The cost will be $2.914 MM for Dallas. 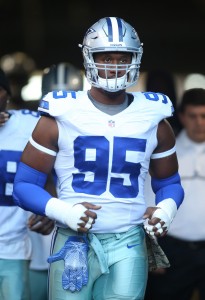 In an effort to retain Irving, the Cowboys were reportedly deciding between first- and second-round tenders for Irving. A first-round tender would have cost Dallas $4.149MM, but also would have offered further protection. Irving is free to sign an offer sheet with another club, and if the Cowboys decide not to match, they would received a second-round pick as compensation.

Last season, Irving managed seven sacks in only eight games, and graded as the league’s No. 29 interior defender, per Pro Football Focus. But Irving missed half the season due to a four-game suspension and a concussion, so the 24-year-old certainly comes with risk.

The Cowboys have already used the franchise tag on defensive end Demarcus Lawrence, so they’re now poised to retain their two best rushers. Dallas isn’t planning to extend Irving this offseason, however, and will likely let him play out the 2018 campaign on the RFA tender.

One comment on “Cowboys Use Second-Round Tender On David Irving”