Here are some details on a deal recently reached in Houston:

Here’s an interesting detail in the contract of the 2022 NFL Draft’s No. 1 overall pick:

Here are some details from a contract recently restructured in Baltimore:

One of the top remaining edge rushers is off the market. Jerry Hughes is signing with the Texans, as first reported by Jordan Schultz and confirmed (on Twitter) by Pro Football Network’s Aaron Wilson. 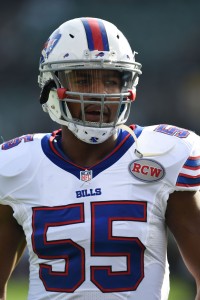 Hughes, 33, began his career in Indianapolis in 2010. He played a reserve role for the first two seasons of his career, but took on a much larger workload the following year. He started six games, totalling 41 tackles and four sacks. During the subsequent offseason, though, he was traded to the Bills.

It was in Buffalo that he enjoyed the bulk of his success. Starting 127 of 144 games with the Bills, Hughes put up back-to-back seasons with 10 sacks in 2013 and 2014. Since then, he has remained a consistent presence on the edge of the Bills’ defense. His level of play earned him a two-year extension in 2019, though the 2021 campaign saw him put up the lowest totals of his tenure in western New York (18 tackles, two sacks).

This offseason, the Bills have made changes in the edge room, including, most notably, the signing of Von Miller. In large part because of that deal, Hughes and Mario Addison were forced to find new homes. The latter has already signed in Houston, making him one of a few notable faces for Hughes. Another is defensive line coach Jacques Cesaire, who previously worked on the Bills’ staff.

As a Sugar Land native and TCU alum, this deal also marks a homecoming for Hughes. Even if he isn’t able to replicate his best years, he should have a notable role to play on what could be a much-improved Texans defense in 2022.

Throughout the offseason, the Jets have been unwilling to part with a second-round pick for Trent Williams. With days to go before the draft, Ralph Vacchiano of SNY hears that their position hasn’t changed.

And, even if the Jets were willing to cough up a second-round pick, Vacchiano doesn’t think that would be enough to bring the Redskins’ left tackle to Gang Green.

More on the Jets and the rest of the AFC East:

The Bills have agreed to sign defensive end Jerry Hughes to a two-year extension worth up to $23MM, according to Adam Schefter of ESPN.com (on Twitter). Of that sum, the deal includes a healthy $19.5MM guaranteed.

Hughes disappointed in the early part of his career, but he has been solid for the Bills ever since coming over in a 2013 trade. The defensive end has not missed a single contest for Buffalo and has 47 sacks to his credit over the last six years. Last year, Hughes recorded seven sacks, a showing topped only by the ten sacks he put up in 2013 and 2014.

The Rams made a push to acquire Hughes before the trade deadline last year, but a deal could not be reached. Instead, the Rams pivoted towards Dante Fowler as a backup plan and Hughes finished out the year with Buffalo, where he impressed with seven sacks and three forced fumbles.

Prior to the extension, the former first-round pick was set to hit the open market after carrying a $10.4MM cap number in 2019. The new deal will keep him under contract through the 2021 season.

After the trade deadline passes each year, there are inevitably reports about the trades that were discussed but never consummated. For instance, Ian Rapoport of the NFL Network reports that teams were trying to trade for Falcons pass rusher Vic Beasley (video link). Beasley has just one sack this year, and he has regressed considerably since his First Team All-Pro performance in 2016, but Atlanta believes it can make the playoffs this season, and it was not prepared to move a foundational piece like Beasley, who is under contract through 2019 via the fifth-year option.