A surprise team emerged victorious in the Von Miller sweepstakes. The decorated edge rusher is set to sign with the Bills, Ian Rapoport of NFL.com tweets. The Bills have announced the signing. 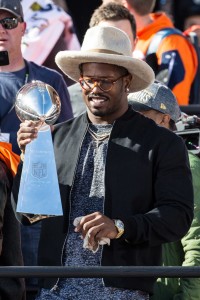 Linked to the Cowboys, Rams and Browns as the legal tampering period wound down, Miller is set to provide a big boost to the Bills’ edge-rushing corps next season. The Bills convinced the future Hall of Famer with a monster offer. Miller is heading to Buffalo on a six-year deal worth $120MM, Rapoport adds (on Twitter).

This contract is not a true $20MM-per-year accord, with Rapoport noting the deal averages $17.5MM across its first four seasons (Twitter link). That said, Buffalo will still pay up to land one of the top pass rushers in NFL history. It includes $51.5MM fully guaranteed (including $45MM at signing), Adam Schefter of ESPN.com tweets, and Aaron Wilson of ProFootballNetwork.com notes (on Twitter) it will pay $53MM by 2023.

The edge rusher market began to move Tuesday, when the Broncos poached Randy Gregory from the Cowboys. Gregory’s last-minute switch took away one of Miller’s options, after the 11-year Bronco teased a reunion. The Rams and Cowboys continued to pursue Miller, with Rapoport adding Sean McVay spent Wednesday attempting to convince him to stay in L.A. (Twitter link). But the Bills spent Wednesday wooing Miller as well. As a result, the Bills secured one of the biggest free agency victories in franchise history.

Miller, 33 next week, missed the entire 2020 season and suffered a midseason injury to close out his Broncos tenure last year. But he bolstered his value considerably with the Rams, recording nine sacks across the team’s final eight games — including two in Super Bowl LVI — alongside Aaron Donald and Leonard Floyd. The Rams were viewed as the favorites earlier Wednesday, and it will be interesting to learn how far they were willing to go to keep Miller.

Los Angeles will likely pick up a 2023 compensatory pick for losing Miller, for whom they sent second- and third-rounders ahead of last year’s trade deadline. The rental worked out, but the Bills giving Miller his second $100MM-plus contract weakens Los Angeles’ pass rush. Miller is the first defensive player in NFL history to sign two $100MM pacts, Field Yates of ESPN.com tweets, with this following up the six-year, $114.1MM Broncos extension he inked months after winning Super Bowl 50 MVP honors in 2016.

Although Miller is going into his 12th season, he has said he wants to play several more years. He has mentioned Bruce Smith‘s sack record as a goal. While that figure (200) will be difficult for the former No. 2 overall pick to reach, Miller (115.5) will chase it in the same city Smith played. He stands to help a Bills team that has struggled to assemble a consistent edge rush in recent years. The Bills will pair Miller with recent high draft choices Gregory Rousseau, Boogie Basham and A.J. Epenesa. Veterans Jerry Hughes and Mario Addison hit free agency today.

This also marks yet another NFC-to-AFC transaction on the edge rusher circuit. Gregory, Miller, Chandler Jones, Za’Darius Smith and Khalil Mack are now in the AFC, which features some oft-discussed quarterbacks as well. The Bills will fit Miller’s contract onto a payroll that includes Josh Allen‘s $43MM-per-year pact. A Stefon Diggs extension figures to be on the radar in 2022 as well.