The Eagles have yet to make an offer to LeSean McCoy, but some of his teammates would like to see progress on that front.Wide receiver DeSean Jackson and offensive lineman Lane Johnson have both expressed support for a Shady signing, as Mike Kaye of NJ.com writes.

“I want to see it,” Johnson said about the notion of the Birds bringing back McCoy. “You already know how I feel.”

McCoy, 32 in July, could provide veteran support behind Miles Sanders and Boston Scott. Then again, he’s not the only notable running back available to the Eagles. After rejecting a one-year, $3MM offer from the Seahawks, Devonta Freeman remains a free agent, though his asking price may have to drop before the Birds get involved.

While the Eagles are reportedly “open to the idea” of bringing back LeSean McCoy, it doesn’t sound like they’ve seriously pursued the veteran running back. Jeff McLane of the Philadelphia Inquirer reports (via Twitter) that Philly hasn’t made an offer to their former Pro Bowler. 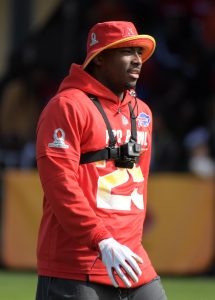 We heard last week that there was some mutual interest in an Eagles/McCoy reunion. The running back spent six seasons in Philly between 2009 and 2014, earning three Pro Bowl trips and two First-Team All-Pro nods. Of course, the Eagles wouldn’t be getting that version of McCoy in 2020; despite starting 22 games for the Bills and Chiefs over the past two years, the veteran has only compiled 979 rushing yards and seven touchdowns on 262 carries.

On the flip side, the Eagles probably wouldn’t be expecting a whole lot of production out of the 31-year-old (32 in July). Instead, he’ll be a mentor in a relatively young running backs room, a grouping that’s currently led by Miles Sanders and Boston Scott.

LeSean McCoy wants to fly with the Eagles one more time. The running back remains available in free agency and the Eagles are at least open to the idea, Tim McManus of ESPN.com hears. 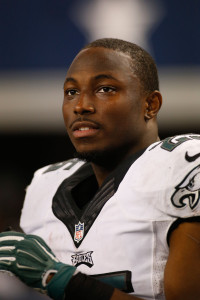 McCoy started his career with the Eagles and mostly excelled in those four seasons. Shady secured three Pro Bowl trips and two First-Team All-Pro nods in Philly before he was traded to Buffalo, where he secured the bag.

Before the start of the 2019 season, the Bills dropped McCoy and the remainder of his five-year, $40MM contract. Then, he hooked on with the Chiefs. He started strong in the first half, but his role was greatly reduced down the stretch. On the whole, it was a bounceback year for the veteran – he averaged 4.6 yards per tote, up from his career low of 3.2 in ’18. He also captured a Super Bowl ring to cap it off.

McCoy isn’t the only veteran RB on the Eagles’ radar. They’re also interested in Carlos Hyde and Devonta Freeman. Last we heard, the Eagles were pretty much lowballing Hyde, pitching the 1,000-yard rusher a veteran’s minimum deal. They might not be able to land Freeman, either. The Seahawks have offered him a deal worth around $3-4MM, which could be too rich for their blood.

McCoy would likely come at a cheaper rate than Freeman. If he returns to Philly, he’ll join Miles Sanders and Boston Scott in their RB group.

Raiders Had Interest In LeSean McCoy

We haven’t heard much about LeSean McCoy‘s market lately, but there have, in fact, been suitors. The Raiders showed interest in Shady before they added Devontae Booker to their running back depth chart, according to Mike Garafolo of NFL.com (Twitter link). 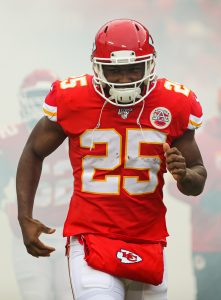 [RELATED: LeSean McCoy Makes His Case To The Eagles]

McCoy “could see” himself with the Eagles, but Howie Roseman & Co. may be more keen on Carlos Hyde, if they can get the 1,000-yard rusher to agree to a dirt-cheap one-year deal. Last year, Hyde averaged 4.4 yards per carry with the Texans, proving that he still has lots left in the tank. McCoy, meanwhile, had a strange up-and-down year with the Super Bowl champs. After a red-hot start in his new Chiefs uniform, McCoy would up as a late-season afterthought.

Still, Jon Gruden loves his veteran players and the Raiders considered McCoy to join starter Josh Jacobs, Jalen Richard, Rod Smith, and third-round rookie Lynn Bowden. The Raiders probably don’t have room for McCoy, but plenty of other teams could be interested in the one-time superstar. If the Philly return doesn’t go down, the Bears would be a logical landing spot for someone like McCoy – ditto for fellow free agent RB Devonta Freeman.

LeSean McCoy “Could See” Himself With Eagles

This week, we learned that the Eagles are interested in Carlos Hyde. Could their search for a veteran running back lead them to old friend LeSean McCoy instead?

“I could see that,” McCoy told the NFL Network on Wednesday (h/t Reuben Frank of NBC Sports Philadelphia). “On another note, since I left, you haven’t seen the [No.] 25 active in green, so you never know. I’m going to keep my options open, though. I could see myself there in Philly. Like I said, that’s home, so you never know.”

Shady spent his first four seasons with the Eagles where he did some of his finest work. With the Birds, McCoy earned three trips to the Pro Bowl and twice earned First-Team All-Pro honors (2011, 2013). In 2013, he led the league with 1,607 yards on the ground – more than 100 yards per game. He also added 52 catches for 539 yards that year, just for good measure.

Last year, the Bills dropped McCoy just before the start of the season. Soon after, he was scooped up by Andy Reid‘s Chiefs on a one-year, $3MM deal. Before that, the Eagles, Patriots, and Chargers all touched base with the six-time Pro Bowler.

His Chiefs season ended with a Super Bowl, but the campaign was a weird one on the whole. Early on, he saw 10-plus touches in seven of the Chiefs’ first eight games. Later, he missed time, and he was hardly seen down the stretch. Still, McCoy averaged 4.6 yards per carry in 2019, after a career-worst 3.2 YPC figure with the Bills in 2018. He could be an interesting addition to the Eagles backfield, especially if they can’t strike a deal with Hyde.

Lesean McCoy had the least productive year of his career this past season, but he won’t be hanging up his cleats. Even though it’s been reported the Chiefs won’t be bringing him back, McCoy still plans to play in 2020, he confirmed in a recent interview with Sirius XM NFL Radio (Twitter link). McCoy said that he’s been in talks with a few teams, and that he wants to go to a “winning franchise.” When asked by the hosts how long he wanted to keep going McCoy said “I really just want to play two more years,” but then added that he wouldn’t put a ceiling on it.

Interestingly, McCoy said it was ageless-wonder Frank Gore who gave him that last piece of advice. McCoy, who had only 465 yards rushing in 13 games with Kansas City, will turn 32 in July. His role decreased down the stretch, and he was a healthy scratch for the Chiefs’ Super Bowl victory. A six-time Pro Bowler, McCoy was recently named to the NFL’s 2010s All-Decade team and had the most rushing yards of any player in the decade.

Chiefs Will Not Retain LeSean McCoy

The Chiefs are not expected to re-sign free agent running back LeSean McCoy for the 2020 campaign, according to Mike Garafolo of NFL.com (video link). 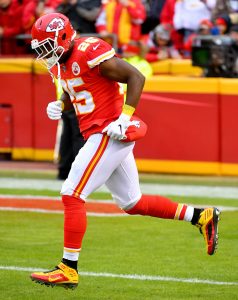 McCoy, 31, has maintain that he wants to play in the NFL next season, and there could be interest in him on the free agent market. Specifically, Garafolo mentions that McCoy could potentially forge a homecoming with the Eagles, while the Chargers could also express interest. Los Angeles head coach Anthony Lynn was in Buffalo alongside McCoy, and that connection could prove valuable.

McCoy was cut by the Bills just ahead of his 11th NFL season, but Kansas City quickly reached out to the veteran back and landed him via a one-year, $3MM deal. Despite his relationship with Andy Reid, McCoy simply never became a large part of the Chiefs’ high-flying offense. While he handled double-digit carries in three of KC’s first four games, he only exceeded 10 totes twice over the rest of the year.

After missing several games with a rib injury, McCoy became a healthy inactive near the end the regular season and through the Chiefs’ Super Bowl run, as Kansas City instead turned to Damian Williams and Darwin Thompson in its backfield.

All told, McCoy rushed 101 times (the fewest attempts of his career) for 465 yards and four touchdowns during his debut Chiefs season. Through the air, McCoy managed 28 receptions for 161 yards and another score. Among the 45 NFL backs with at least 100 carries, McCoy ranked 25th in success rate, which measures the frequency of plays in which McCoy increased Kansas City’s expected points.

LeSean McCoy To Be Inactive For Super Bowl?

LeSean McCoy might not be active for his first career Super Bowl appearance. League sources told NFL.com’s Ian Rapoport that the Chiefs running back may be inactive tomorrow (Twitter link). Rapoport notes that the veteran is healthy and ready to play, but while nothing’s been finalized, it sounds like McCoy won’t be on the active roster.

This isn’t incredibly surprising news, as McCoy was inactive for the AFC Championship game after having played only a single snap during the Divisional Round. However, there was some optimism that Andy Reid would make him active for the big game, especially since the team would otherwise be rostering only two running backs. Damien Williams has taken hold of the gig atop the depth chart, with Darwin Thompson left as the lone backup at the position.

The six-time Pro Bowler joined the Chiefs this past preseason after getting cut by the Bills, choosing Kansas City over suitors like the Patriots, Eagles, and Chargers. Initially, McCoy carved out an immediate role. He saw 10-plus touches in seven of the Chiefs’ first eight games but wound up a healthy scratch and battled an illness at times over the past two-plus months. In total, Shady rushed for 465 yards and four scores on 101 carries (he also added another 28 receptions for 181 yards and one touchdown).

While tomorrow’s potential move could seemingly lead to retirement, McCoy said earlier this week that he has no intention of hanging up his cleats.

As Rapoport opines, the organization may use McCoy’s roster spot on a position of need. The reporter specifically points to the defensive line as a potential “key area” considering the 49ers rushing attack.

The Chiefs have at times used LeSean McCoy as their top running back this season, but at other junctures, the decorated back has barely played for the AFC champions. McCoy has played just one playoff snap.

However, the former Eagles and Bills Pro Bowler wants to return for what would be a 12th season in 2020.

Shortly after his Bills release, McCoy signed a one-year, $3MM deal with the Chiefs. A four-team derby that also included the Patriots, Chargers and Eagles ended with the six-time Pro Bowler choosing to reunite with Andy Reid in Kansas City.

Initially, McCoy carved out an immediate role. He saw 10-plus touches in seven of the Chiefs’ first eight games but wound up a healthy scratch and battled an illness at times over the past two-plus months. Shady has not seen a carry since Week 15, and the Chiefs have used Damien Williams almost exclusively as their postseason back.

Still, the interest that came McCoy’s way late in free agency may be indicative of at least one more contract coming in March. McCoy averaged 4.6 yards per carry this season, after a career-worst 3.2 YPC figure with a limited Bills team in 2018. After logging 200-plus carries in each season from 2010-17, McCoy has not topped 170 in each of the past two years. He will enter free agency with 2,950 career touches (third-most among active backs) and will be 32 by Week 1 of the 2020 season.

Let’s take a quick spin around the AFC West: