Earlier Wednesday, reports indicated the Titans had two new COVID-19 positives. One of those appears to have been fourth-year wide receiver Corey Davis. 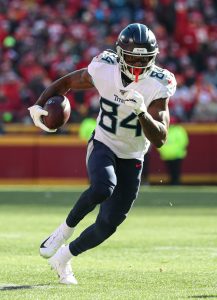 The Titans placed Davis on their reserve/COVID-19 list Wednesday afternoon. Tennessee now has 12 players on that list. The team still cannot re-enter its facility for practice, putting its Sunday game against Buffalo in doubt.

The league, according to NFL.com’s Tom Pelissero (on Twitter), has launched an investigation into the Titans. They have seen a coronavirus outbreak spread among their roster and are believed to have conducted an illegal offsite workout. Some around the league believe the league is set to levy a “historic” punishment against the team to set an example, per Mike Florio of Pro Football Talk. In addition to levying six-figure fines against teams for their coaches not complying with mask protocols, the NFL has threatened to strip teams of draft picks. That would seem to be the baseline for a “historic” punishment.

If the Titans-Bills game does happen this week — which is still the league’s plan — Tennessee could be severely shorthanded at wide receiver. No. 1 target A.J. Brown has not played since Week 1, but the team’s virtual injury report listed the second-year player as going through a pseudo-limited practice. This marks a pivotal year for Davis, after the Titans did not pick up his fifth-year option in May. Through three games, the former top-five pick has 15 receptions for 206 yards and a touchdown.