Let’s add another team to the list of potential Leonard Fournette suitors. NFL Network’s Mike Garafolo tweets that the Buccaneers are among the teams “making a push” for the running back. Albert Breer of TheMMQB is hearing similar things, with the reporter tweeting that Tampa Bay has “emerged as a serious suitor” for Fournette. 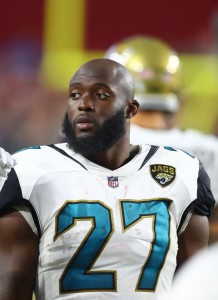 The Buccaneers’ offense has received a major makeover this offseason, with Tom Brady, LeSean McCoy, and Rob Gronkowski joining wideouts Mike Evans and Chris Godwin. However, thanks to the team’s lavish spending, the front office doesn’t have a whole lot of financial flexibility; Greg Auman of The Athletic estimates on Twitter that the Bucs could only offer Fournette around $1.9MM without having to make another move.

While Tampa Bay may have added McCoy, the team has continued to tout Ronald Jones as their starter. The former second-rounder had a breakout campaign in 2019, finishing with 724 rushing yards and six scores on 172 carries. Of course, that production doesn’t hold a candle to Fournette, who finished last season with 1,152 rushing yards on 265 carries. He also added 76 receptions for 522 yards.

The 25-year-old was waived by the Jaguars earlier this week, and we’re naturally hearing about potential suitors. Earlier today, we heard that the Patriots could be a fit for the running back. Meanwhile, the Bears reportedly won’t pursue the former fourth-overall pick.