The Bears have been connected to 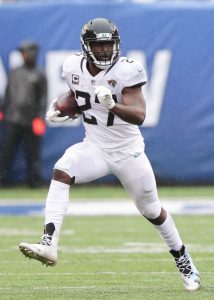 Leonard Fournette, but it doesn’t sound like the former Jaguars standout will be coming to Chicago. When asked about the former No. 4 overall pick, head coach Matt Nagy told reporters that he’s comfortable with his current group of running backs (Twitter link via ESPN.com’s Jeff Dickerson).

The Jaguars released Fournette earlier this week and all 31 of the league’s other teams passed on claiming the remainder of his contract. Fournette would have earned nearly $4.2MM for 2020, and that price tag was too high for everyone else. Now, Fournette is a full-fledged free agent, but he’ll likely have to settle for less money than he wanted.

Fournette totaled a career-high 1,674 yards from scrimmage last season, but Jay Gruden wasn’t a huge fan of his work. Instead, Gruden signed old pal Chris Thompson to lead the charge and add some pass-catching ability to the backfield. Ryquell Armstead, a 2019 fifth-rounder who averaged just 3.1 yards per carry as a rookie, also figures to have a sizable role at RB.