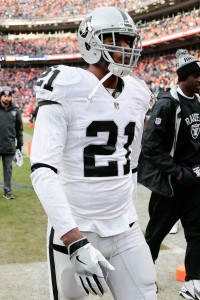 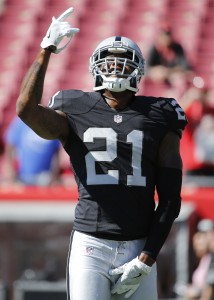 The Raiders have released cornerback Sean Smith, according to Ian Rapoport of NFL.com (on Twitter). This move was anticipated, particularly in light of Smith’s ongoing legal situation. 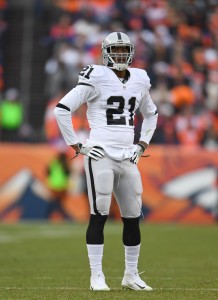 It gets worse for Smith. The 30-year-old is expected to plead guilty to a felony count of assault with great bodily injury and be sentenced to one year in jail and three years of probation, according to Nathan Fenno of the Los Angeles Times (on Twitter) stemming from an incident on July 4, 2017, in Pasadena Calif.

Smith would have counted for $8.25MM against Oakland’s cap, making this move something of a no-brainer even prior to the announcement that he’d plead guilty to the felony assault charges.

The veteran graded out as just the No. 73 cornerback among 121 qualifiers last year, per Pro Football Focus. He’s picked off two passes in each of the last three seasons but had a career-low four pass defenses last year while appearing in 14 games, starting eight.

Smith was a seventh-round pick of the Dolphins in 2009 and signed a four-year, $40MM deal with the Raiders prior to 2016 after spending three seasons with the Chiefs. The Raiders cut cornerback David Amerson a year after signing him to a four-year, $35MM deal. Fellow cornerback T.J. Carrie, who started 15 games for the Raiders last year and was rated by Pro Football Focus as the league’s No. 22 cornerback, is set to become an unrestricted free agent.

Carrie, who grew up in the Bay Area, has expressed interest in returning to Oakland. The team also has Gareon Conley, Dexter McDonald, Antonio Hamilton, Shaquille Richardson, Darius Hillary and Tevin Mitchel on the roster at cornerback. The Raiders also hold the No. 10 overall pick in the upcoming draft, with cornerback certainly among their top targets.

Having been introduced as the Raiders’ new head coach earlier today, Jon Gruden says that interviews for assistant coaches will begin on Wednesday morning, according to Michael Gehlken of the Las Vegas Review-Journal (Twitter link). Gruden, who already has three coordinators in place, kept certain NFL coaches on “red alert” in regards to when he’d re-enter the league, per Gehlken. Oakland has agreed to terms with Greg Olson (offensive coordinator), Paul Guenther (defensive coordinator), and Rich Bisaccia (special teams coordinator) to join Gruden’s initial staff.

Here’s more from the Bay Area, with a focus on other coaches that Gruden could soon lure to Oakland:

A Los Angeles County Superior Court judge ruled on Wednesday there is enough evidence to take Raiders cornerback Sean Smith to trial for the alleged incident that occurred on July 4 involving Smith and his sister’s then-boyfriend, Nathan Feeno of the Los Angeles Times reports. The preliminary hearing featured two witnesses saying a man identified as Smith “stomped” the head of Christopher Woods in an incident on a street corner in Pasadena, Calif. Woods underwent surgery to repair five facial fractures, he said while in court. Both of his eyes were damaged, and Woods said he tore an ACL in the alleged beating. The 30-year-old Smith will be arraigned on Jan. 3. If convicted on this assault charge, Smith faces seven years in prison.

Here’s the latest from the Western divisions, moving to some Seahawks news.