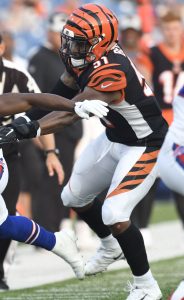 Tyler Kroft will not be making a return from injury this season. The Bengals kept the tight end on their active roster in hopes he would be able to come back from his foot injury, but that won’t happen now.

The Bengals have been operating shorthanded at tight end for most of the season. Tyler Eifert has been on IR for weeks, while Kroft has been on the mend with a broken bone in his left foot. C.J. Uzomah‘s filled in as the starter, and that arrangement will continue.

While Kroft is expected to be healthy in time for free agency, this was not a good contract year. Kroft attempted to avoid surgery in order to play for a Bengals team contending for a playoff spot, per NFL.com’s Ian Rapoport (on Twitter), but he’ll now be out. It appears likely a procedure will occur soon.

In 2017, Kroft stepped in for an injured Eifert and caught 42 passes for 404 yards and seven touchdowns — all far and away career-high marks. Other than his ’17 contributions, Kroft has not contributed much statistically since joining the Bengals as a 2015 third-round pick.

Both Kroft and Eifert are free agents in 2019. While another Eifert injury clouds his future with the team, Kroft sought an extension this summer. That did not end up coming to pass. Kroft caught just four passes this season.

A 2015 fifth-rounder, Uzomah is also a free agent at the year’s conclusion. So, the Bengals will have decisions to make at this position and won’t have much in the way of 2018 work samples on which to do so. Although, these next several games will be key for Uzomah in this regard.

The Bengals placed linebacker Kevin Minter on injured reserve with a hamstring injury. To take his place, they have promoted fellow ‘backer Brandon Bell from the practice squad.

Minter signed a one-year, $4MM deal with the Bengals in free agency this past spring. The Bengals were willing to give Minter a longer deal, but Minter wanted the opportunity to hit the 2018 free agent market. Unfortunately, he did not give himself a great platform for the open market. Injuries limited Minter to just nine games this year and his 32 tackles were the lowest of any of his seasons as an on-field regular.

Before coming to Cincinnati, Minter spent the first four seasons of his career with the Cardinals. He started all 32 regular season games for Arizona in 2015 and 2016 and played the most snaps (1,003) of any Cardinals linebacker last year. In that time, he racked up 81 tackles, 3.5 sacks, and four passes defensed while grading as the league’s No. 25 linebacker, per Pro Football Focus.

Minter will miss the Bengals’ final three games against the Vikings, Lions, and Ravens.