The Jaguars have agreed to sign free agent defensive tackle Datone Jones, according to his agents at DEC Management (Twitter link). In a corresponding move, Jacksonville has waived defensive end Shane Bowman, per Michael DiRocco of ESPN.com (Twitter link). The club has since confirmed the transaction. 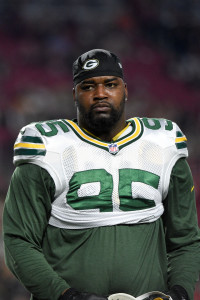 Jones, 28, was selected by the Packers with the 26th overall pick of the 2013 draft, but he’s never been able to put it all together at the NFL level. In four seasons with Green Bay, Jones appeared in 60 games, but made only seven starts and never topped 600 snaps in any individual campaign. Jones posted just nine total sacks with the Packers, who subsequently declined his fifth-year option and allowed him to hit free agency in 2017.

After reaching the open market, Jones signed a one-year deal with the Vikings, but didn’t make Minnesota’s final roster. He bounced around the NFL, spending time with the Lions and 49ers before landing with the Cowboys midway through the 2017 season. Jones played Dallas’ season opener last year, but a hamstring injury ended his season in early September.

Jones will face an uphill battle to make the Jaguars’ roster. Fellow defensive tackles Marcell Dareus, Abry Jones, and Taven Bryan are locks for Jacksonville’s 53, so Jones will likely compete with rookie seventh-rounder Dontavius Russell for a roster spot.

The Jaguars have become the third NFL team — joining the Steelers and Chargers — to announced their crop of undrafted free agent signings following the conclusion of the 2019 draft. Jacksonville agreed to terms with the following 21 UDFAs:

Saivion Smith, in particular, is an interesting addition for the Jaguars, as he’d been mentioned as a possible third-round pick earlier this year. Lance Zierlein of NFL.com pegged Smith as a Round 4 or 5 selection, noting the Alabama product’s ability as a press-man corner but cautioning that he must improve his consistency. Simth could compete for snaps behind incumbent Jacksonville corners Jalen Ramsey, A.J. Bouye, and D.J. Hayden.