Here are Monday’s minor moves from the AFC:

11:00am: Hewitt’s three-year extension is worth $7.5MM, a source tells Ian Rapoport of NFL.com (on Twitter). As part of the deal, he received $1.5MM guaranteed in the form of a signing bonus.

10:09am: The deal is now official, the team has announced.

9:21am: The Bengals and Ryan Hewitt have agreed to a three-year contract extension, league sources tell Jim Owczarski of the Cincinnati Enquirer. The new deal pact will keep Hewitt in place through the 2019 season. 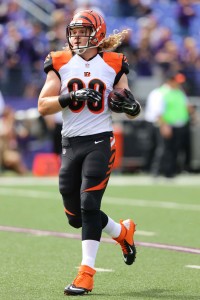 Before the new accord, Hewitt was slated to earn $600K this year before hitting the open market after the upcoming season. The Bengals did not want to chance losing him and have been since the spring to get an extension done.

Hewitt joined the Bengals as a UDFA out of Stanford in 2014 and immediately found playing time, seeing 11 starts as a rookie. Last year, Hewitt started 12 times and appeared in 15 games overall, catching 18 passes for 185 yards.

To find out which current Bengals rookies can hit the ground running in their first year, check out Dave-Te Thomas’ Impact Rookies entry on Cincinnati.

Ravens outside linebacker Pernell McPhee is a player to watch in tonight’s third preseason game against the Redskins, says Aaron Wilson of the Baltimore Sun: “Healthy this year after having no surgeries this offseason — unlike previous years when he’s undergone groin and knee procedures — the Ravens’ outside linebacker has been one of the best pass rushers in the NFL this preseason with one sack and five quarterback hurries. McPhee appears to have recaptured his rookie form from 2011 when he finished second on the Ravens with six sacks.” Meanwhile, ESPN’s Jaymison Hensley points out that McPhee is in the final year of his rookie deal, meaning the Ravens should benefit from healthy, motivated player seeking a contract extension.

Here’s a roundup of more links from around the AFC:

MONDAY, 4:13pm: The Bengals have made their undrafted free agent signings official today, announcing their 10 new players in a press release. Here are the newest Bengals: