The Los Angeles District Attorney’s Office announced Thursday that it has charged Raiders cornerback Sean Smith with assault. Smith “faces one felony count each of assault by means of force likely to produce great bodily injury and battery with serious bodily injury” stemming from an alleged assault on his sister’s boyfriend on July 4. Smith, who allegedly beat and stomped on the victim’s head, could face up to seven years in prison if he’s convicted of the charges. His first court date is scheduled for Sept. 29.

“Sean has maintained his innocence,” Smith’s attorney, Daniel Rosenberg, told Michael Gehlken of the Las Vegas Review-Journal. “We are going to enter a plea of not guilty and fight these charges.” 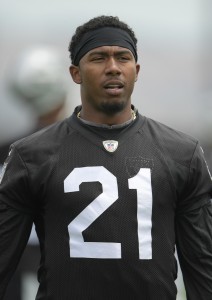 Smith, whom the Raiders signed to a four-year, $40MM contract in 2016, is in his second season with the club. The former Dolphin and Chief started in all 15 of his appearances last year, totaled two interceptions and ranked a stellar 16th in performance among Pro Football Focus’ 110 qualified corners. Smith, 30, has been competing this summer to retain his starting role for a Raiders team with Super Bowl hopes, but his chances of remaining near the top of their depth chart are now in even greater jeopardy.

Even if Smith avoids serious legal punishment, the NFL could discipline him in some form, as it has done with other players in the past. For now, it’s possible Smith will go on paid leave, Mike Florio of Pro Football Talk reports.