Jelani Jenkins will return to the AFC East after an unsuccessful foray with the Raiders this offseason. The Bills are signing the former Dolphins linebacker, Joe Buscaglia of WKBW tweets. 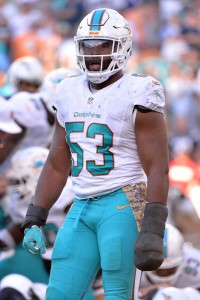 The Raiders released Jenkins with an injury settlement earlier this month, and it looks like Buffalo feels confident the 4-3 outside linebacker has recovered sufficiently from the groin injury that sidelined him. The Bills cut rookie cornerback Greg Mabin to make room on the roster.

A 2013 fourth-round pick, Jenkins started for three seasons with the Dolphins. Although injuries marred his 2016 campaign, Jenkins stood out as a first-year starter two years prior in making 110 tackles and registering 3.5 sacks. The Bills did not have much experience on their linebacking corps behind starters Lorenzo Alexander and Ramon Humber, carrying fifth- and sixth-round rookies Matt Milano and Tanner Vallejo as second-stringers.

The Raiders signed Jenkins to a one-year, $1MM deal to compete for a starting job on a defense without much linebacker experience. He could not secure the outside linebacker position opposite Bruce Irvin and was released.

The Raiders have apparently parted ways with their lone defensive free agent signing. Linebacker Jelani Jenkins tweeted that he’s been released by the organization. 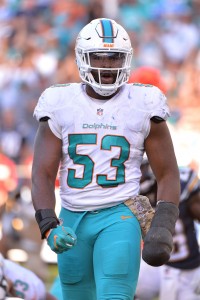 The 25-year-old inked a one-year deal with the Raiders back in March, and many expected him to serve as a top reserve for starting outside linebackers Bruce Irvin and Shilique Calhoun. Now, the team might be eyeing Tyrell Adams or James Cowser for that top backup role, or they could also turn to their trio of undrafted rookies (LaTroy Lewis, Brady Sheldon, and Nicholas Morrow).

Prior to his brief Raiders tenure, Jenkins spent four seasons in Miami. Selected in the fourth round of the 2013 draft, the linebacker had a breakout campaign in 2014, compiling 110 tackles and 3.5 sacks. Jenkins started another 13 games in 2015, but his role was reduced in 2016. The linebacker ultimately appeared in nine games (seven starts), compiling only 29 tackles.

Two Alabama stalwarts are making the pre-draft visit rounds. Reuben Foster had dinner with Bears brass on Sunday night and visited the team’s facility today, Ian Rapoport of NFL.com notes (on Twitter). Chicago holds the No. 3 pick in the draft. Although, the Bears spent upper-echelon inside linebacker money on Danny Trevathan and Jurrell Freeman last offseason.

Jelani Jenkins has found a new home. The Raiders announced that they have signed the linebacker. Jenkins’ Raiders pact is for one year, Scott Bair of CSNBayArea.com tweets.

The Raiders have been in the market for support at both weakside linebacker and middle linebacker. Jenkins’ best fit may be on the weakside, but it’s possible he’ll see time at both spots.

Jenkins’ best season with the Dolphins came in 2014 when he had 110 combined tackles, 3.5 sacks, two forced fumbles, and one pass defensed. We haven’t seen him replicate those numbers in the last two years, however. In 2016, Pro Football Focus gave Jenkins the worst grade of any linebacker with enough snaps to qualify for ranking. His 31.4 score was hilariously bad, but he had good showings (76.9; 73.2) in the previous two campaigns.

The Raiders are looking for help at weakside linebacker and middle linebacker. Caplan hears from teams that Jenkins profiles more as a weakside ‘backer, which is the position he primarily played with the Dolphins.

Jenkins made some noise in 2014 when he had 110 total tackles, 3.5 sacks, two forced fumbles, and one pass defensed. From there, he saw his role gradually decrease. In 2015, he had 71 total tackles and three passes defensed. Last year, Jenkins appeared in nine games and accumulated 29 tackles.