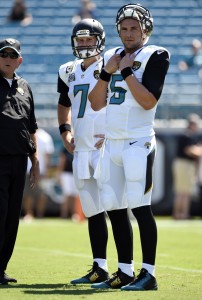 Even if the Jaguars were open to signing a free agent quarterback, they’d enter a market that is extremely lacking in options. Colin Kaepernick is the only available passer who may represent a clear upgrade over Bortles and/or Henne, but the former 49er is a tough sell in some NFL markets due to his social activism. Other quarterbacks who remain unsigned include Robert Griffin III, Shaun Hill, and Zach Mettenberger.

Bortles hasn’t lost the Jaguars’ quarterback job just yet, per Pelissero, who cautions that Jacksonville is running a true competition between the former No. 3 overall pick and Henne. However, the club’s decision won’t be based solely on production — finances are involved, too. The Jaguars have already exercised Bortles’ 2018 option worth north of $19MM, and that total will become guaranteed if Bortles suffers a serious injury and can’t pass a physical next spring.

As such, Jacksonville could potentially bench Bortles for the season in order to keep him healthy, ensuring that they’ll be able release him in 2018. The Redskins used the same tactic in 2015, placing RG3 on the sidelines so that he wouldn’t suffer an option-guaranteeing injury. Of course, the Jaguars wouldn’t be in this precarious position had they declined Bortles’ option earlier this year, a move Jason Fitzgerald of Over the Cap argues would have been correct.