The Chiefs will bring Chad Henne back for another season. On Wednesday, the veteran quarterback agreed to a new one-year deal worth $2MM (Twitter link via NFL.com’s Mike Garafolo).

For Henne, this will mark his fifth season as Patrick Mahomes‘ backstop, though he did not see a single snap in 2019 due to injury and a lack of need. All in all, he’s made eight appearances for Kansas City with just one start, a 2020 late season loss to the Chargers.

Henne will get a slight pay bump from his previous deal, a two-year, $3.25MM pact signed in March of 2020. He might not see a ton of action, but he’ll look for an opportunity to improve on his career marks of 75 appearances, 13,290 yards, 60 touchdowns, and 63 interceptions.

9:25pm: The two sides have agreed to a two-year deal, according to Paylor (via Twitter).

8:24pm: After spending the past two years in Kansas City, Chad Henne and the Chiefs could be heading towards another contract. Terez A. Paylor of Yahoo reports (via Twitter) that the organization is interested in re-signing the veteran quarterback.

In total, the veteran has appeared in 68 games during his career, connecting on 59.3-percent of his passes for 12,960 yards, 58 touchdowns, and 63 interceptions.

Other than Mahomes, the Chiefs are also retaining quarterback Kyle Shurmur on their offseason roster.

Henne suffered a broken ankle during the preseason, forcing him out of action. Patrick Mahomes is listed as questionable for tomorrow’s game against the Vikings, but that doesn’t necessarily mean Henne will force his way into the lineup. Rather, Matt Moore will likely get the start should Mahomes sit out. Moore got the start last weekend, throwing for 267 yards and two scores.

Henne signed a two-year deal with the Chiefs back in 2018. He got into a single game last year, completing two of his three pass attempts. His last extended stint as a starter came in 2013 when he started 13 games for the Jaguars. The 34-year-old will hit free agency this offseason.

Ivie, a 2017 seventh-rounder out of Florida, spent all of the 2018 campaign on Kansas City’s practice squad. He made the Chiefs opening-day roster, but he was waived and added to the practice squad in mid-September.

Senat, a former sixth-round pick, was claimed off waivers from the Ravens back in September. Shurmur, a former Vanderbilt standout, was promoted from the Chiefs’ practice squad following the injury to Mahomes.

Per a team announcement, the Chiefs have designated quarterback Chad Henne for return from injured reserve. The news does not come as much of a surprise. Henne, who suffered a broken ankle in the preseason, was reportedly nearing a return to the field.

Whether Henne will actually see game action may be more likely than previously expected. Henne was slated as the team’s backup quarterback, behind Patrick Mahomes, before the season, but when he suffered a broken ankle, the they shifted to Matt Moore.

The quarterback in Kansas City has a lot of question marks at the moment given the uncertain status of Mahomes, who dislocated his kneecap last week. The team has said that Moore will take the majority of first-team reps while Mahomes tries to work his way back. If Mahomes is unable to go this Sunday, Henne could serve as Moore’s backup. 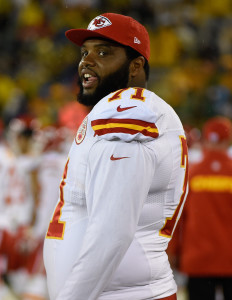 The Chiefs are signing quarterback Chad Henne to a two-year deal, a source tells Mike Garafolo of NFL.com (on Twitter). Henne, 33 in July, will serve as the No. 2 QB behind Patrick Mahomes.

The Chiefs have been on the lookout for a backup/mentor to pair with Mahomes. They had interest in signing Chase Daniel to fill that role, but he wound up joining the Bears on a two-year deal worth $10MM with $7MM guaranteed.

Kansas City may have preferred Daniel for the job, but Henne comes with more in-game experience. Daniel has only two starts in his entire NFL career and none since 2014. Henne, meanwhile, boasts 53 career starts, though he also hasn’t made a start since ’14.

The last time Henne saw consistent playing time was 2013, when he completed 60.6% of his passes for 3,241 yards and 13 touchdowns against 14 interceptions.