The Giants are moving on from one of their longest-tenured players. Josh Alper of ProFootballTalk.com reports that the organization is releasing linebacker Mark Herzlich.

The 31-year-old joined the Giants as an undrafted free agent out of Boston College back in 2011, and he’s spent the past eight seasons with the organization. Serving mostly as a backup linebacker and special teamer, Herzlich has managed to put up some solid numbers throughout his career, including a 52-tackle campaign back in 2014.

However, the veteran spent the entire 2017 campaign on the injured reserve. During his last healthy season in 2016, he saw a reduced role, compiling only seven tackles in 14 games. It’s uncertain if another team will be willing to take a gamble on the linebacker at this stage of his career.

With the move, the Giants now have only three inside linebackers on their roster: B.J. Goodson, Alec Ogletree, and Ray-Ray Armstrong. 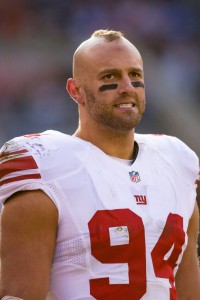 Herzlich has been a reserve linebacker and special teamer for the G-Men for the past six seasons. This year, he changed his jersey number from 94 to 44 so that can appear eligible on offensive plays, but we won’t get to see him line up as a fullback/tight end this year.

The exact nature of his injury is presently unclear. Herzlich has been sidelined as of late with what was initially diagnosed as a stinger in his neck. Apparently, it’s something more serious.

The Patriots could offer a tender to free agent running back LeGarrette Blount in an attempt to retain him for the 2017 season, as Jason Fitzgerald of Over the Cap details (Twitter links). Unrestricted free agents that aren’t signed by May 9 are eligible to be tendered a one-year contract by the player’s original club for 110% of his prior year salary (for Blount, that would amount to roughly $1.1MM). Not only would such a maneuver allow New England to be in line for a 2018 compensatory pick if Blount signs elsewhere, but it would give the Patriots exclusive negotiating rights with the veteran back if he doesn’t land a contract by July 22. This option isn’t exclusive to New England — any team can do this with its unsigned UFAs — but Fitzgerald notes that such a move would be a typical Patriots strategy.

For the third time in four years, the Giants reached an agreement to bring back Mark Herzlich. The Giants re-signed the reserve linebacker and special-teamer today, Ralph Vacchiano of SNY.tv reports (on Twitter). 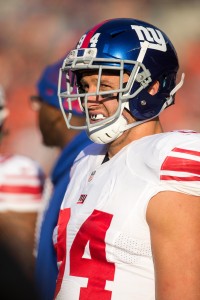 A former UDFA, Herzlich has spent six seasons with the Giants. Last year, though, marked the only one that did not feature at least two Herzlich starts. The inspirational cancer survivor functioned strictly as a backup and special teams presence in the 14 games for which he was active during the 2016 regular season.

The Giants re-upped Herzlich on a two-year deal in 2015 and kept him on a one-year accord in 2014. The 29-year-old recovered a fumble last season but has been credited with just 17 tackles the past two years. He made 52 in 2014, which featured a career-high eight starts.

Jets defensive lineman Leonard Williams was one of the more impressive rookies in the league in 2015, and with a full professional season under his belt, he says he is ready to take his game to the next level. Said Williams, “I know the playbook now, so I don’t have to think as much when I’m out there, I can just play. It’s less pressure now that I’m not a rookie anymore, and I don’t have to have that tag or label on me. It’s just been more comfortable overall this year” (article via Kaylee Pofahl of The New York Post).

After racking up 63 tackles and three sacks last season, Williams indicated that he has put a special emphasis on his pass rush during offseason workouts in an effort to become a more complete player. As Josh Alper of ProFootballTalk.com writes, Williams and defensive line cohort Sheldon Richardson are two big reasons why New York has not made more of an effort to sign Muhammad Wilkerson to a long-term deal.