The Broncos’ WR corps represents one of the club’s biggest question marks in 2019. The unit is fronted by Emmanuel Sanders, but Sanders is 32 and is coming off a torn Achilles. Denver hopes that second-year players Courtland Sutton and DaeSean Hamilton will continue to progress, and former UDFA Tim Patrick flashed at the end of last season, but it may be asking a bit much for all three players to consistently perform at a high level in 2019.

To that end, the Broncos continue to be on the lookout for WR depth, and they signed rookie wideout Jamarius Way yesterday. Ryan O’Halloran of the Denver Post expects sixth-round rookie Juwann Winfree and UDFA Trinity Benson to make the club, and Benson has been playing particularly well, even earning some playing time with the first-stringers.

As Nicki Jhabvala of The Athletic tweets, before the Broncos signed Way, they also worked out Travis Rudolph. Rudolph, a Florida State product, signed with the Giants after going undrafted in 2017, and he saw action in seven games (one start) for Big Blue that year. He posted eight catches for 101 yards.

New York waived Rudolph last September, and he signed on with the Dolphins’ practice squad in October. Unfortunately, he suffered a torn ACL during a practice with Miami, which brought his season to an end. Jhabvala notes that Rudolph’s tryout with Denver was his first since the injury, and while the Broncos went in a different direction, it’s encouraging that Rudolph has been cleared for football activities. It wouldn’t be surprising to see him get more workouts in the coming weeks.

The Giants not only fell to 0-5 with a defeat against the Chargers on Sunday, but witnessed four of their top wide receivers suffer injuries of varying severity. With a lack of options on offense, New York will promote wideout Travis Rudolph from its practice squad and re-sign wide receiver Tavarres King, according to Ian Rapoport of NFL.com (Twitter link) and Jordan Raanan of ESPN.com (Twitter link). 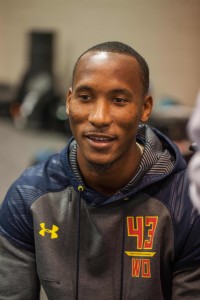 Rudolph and King likely won’t be the only additions the Giants make in the coming days, as the club simply is bereft of wide receiver talent at the moment. Odell Beckham Jr. and Dwayne Harris are both out for the season after suffering a fractured ankle and a broken foot, respectively. Sterling Shepard has a sprained ankle and will miss several weeks, while Brandon Marshall also has an ankle sprain and an undetermined timetable, tweets Rapoport.

New York doesn’t have the benefit of turning to an established run game — the club ranks 31st in rushing DVOA — so adding more pass-catchers may be Big Blue’s best option. Ed Eagan and Marquis Bundy are on the Giants’ practice squad and could conceivably be promoted alongside Rudolph, while a free agent addition could also make sense. Marquess Wilson, Dorial Green-Beckham, Steve Johnson, Vincent Jackson, and old friend Victor Cruz are among the top options available on the open market.

Rudolph, for his part, went undrafted out of Florida State earlier this year and has spent the first five weeks of the season on New York’s practice squad. In his final campaign as a Seminole, Rudolph posted 56 receptions for 840 yards and seven touchdowns. In a predraft profile, Lance Zierlein of NFL.com called Rudolph a “solid route runner” with good hands but noted his lack of short-area quickness.

King, meanwhile, spent 2-14-16 with the Giants and caught a touchdown pass in the club’s playoff loss to the Packers earlier this year. All told, he’s managed only four receptions over the course of his career. King was released by the Giants last month and had subsequently auditioned for the Patriots, Bills, and Jets.