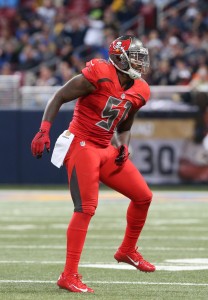 Veteran receiver Cecil Shorts is expected to return to the Texans and finish out the second and final year of the two-year contract he signed prior to the 2015 season, according to Aaron Wilson of the Houston Chronicle. Shorts, 28, appeared in 11 games last year, catching 42 passes for 484 yards and two touchdowns. Houston could save almost $3MM by releasing Shorts, but with fellow pass-catcher Nate Washington heading for free agency, the club will need options out wide.

Let’s take a look at some of the latest news coming out of NFC cities, starting with Tony Romo‘s immediate future.

Our own Sam Robinson took you through some of the AFC Mailbags earlier today. Now to give the NFC some love, here are a few of the mailbags from that other conference:

Bruce Carter occupies the fifth-highest cap charge for the Buccaneers this season but could play an unfamiliar position for his new team. The Bucs plan to slot the former Cowboys outside linebacker in the middle of their 4-3 alignment, writes Jenna Laine of SportsTalkFlorida.com.

With the weak-side spot spoken for in All-Pro Lavonte David and versatile Danny Lansanah slated to work at the strong-side position, Carter will attempt to earn his money at a spot he’s rarely played. The former Cowboys second-round pick struggled at outside backer last season, grading well below zero on Pro Football Focus’ scale, but arguably Carter’s best campaign came as an inside performer. The 27-year-old North Carolina product rated adequately on PFF (subscription required) during 11 starts inside in what was then a 3-4 look in Dallas in 2012.

Playing all three second-level spots in Tampa last season, the bulkier Lansanah’s best work came on the strong side — PFF doled out an eye-catching 6.1 grade for his Week 13 work against the Bears — and the soon-to-be-30-year-old former United Football League standout will begin his season there.

Here is some other news from Tampa and other NFC locales.