The Chiefs worked out free agent linebacker Jamari Lattimore today, according to Aaron Wilson of the Houston Chronicle (Twitter link). 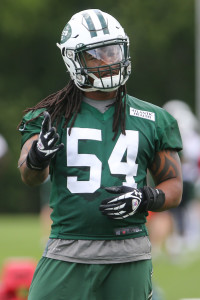 Kansas City is searching for inside linebacker depth, as veteran Derrick Johnson is coming off the second torn Achilles of his career, while Ramik Wilson, who fared well in 11 starts a year ago, is still relatively inexperienced. Other options on the Chiefs’ roster currently include Justin March-Lillard, Terrance Smith, and D.J. Alexander. Earlier this year, Kansas City took a look at free agent Rey Maualuga, but no deal came out of the meeting.

Lattimore, 28, has spent time with three clubs — the Packers, Jets, and Bills — since entering the league as an undrafted free agent in 2011. Although he’s appeared in 64 career games, Lattimore has largely served as depth and a special-teamer, as his only starts (9) came with Green Bay from 2013-14. Lattimore didn’t make Buffalo’s final roster after signing with the club last March, and never landed another deal during the 2016 campaign.

The Bills have released linebacker Jamari Lattimore, as Joe Buscaglia of WKBW tweets. The move makes room for the addition of fullback Dan Vitale, who was claimed off waivers from the Bucs today.

Lattimore was slated to compete for a spot on special teams, but he ultimately did not make the cut. For his career, Lattimore has appeared in 64 career games (nine starts) and has 68 tackles, two sacks, and one interception to his credit.

For a full rundown of moves made by the Bills and other teams in the AFC East, check out our running tracker.

Jets cornerback Darrelle Revis has fired agents Neil Schwartz and Jonathan Feinsod, writes Brian Costello of the New York Post. The Schwartz and Feinsod duo had many clashes with the Jets regarding Revis during their tenure representing him – including one that featured ex-head coach Rex Ryan shouting at the two during an episode of “Hard Knocks” amid the cornerback’s 2010 holdout – as Costello notes. Revis ultimately agreed to a four-year, $32MM deal to end his holdout that summer, and the seven-time Pro Bowler has collected a total of $101MM during his career with the help of his two ex-agents. Revis, 30, has four years remaining on the five-year, $70MM pact he inked with the Jets in 2015. That contract is second in overall value among cornerbacks, though it was first until Josh Norman‘s recent $75MM deal with Washington, and paces all corners in guarantees ($39MM).

More from the AFC East:

We learned yesterday that the Lions have disputed the Buccaneers‘ offer sheet to George Johnson, extending the process beyond yesterday’s initial decision deadline. However, it wasn’t immediately clear what Detroit’s issue with the offer sheet was.

Mike Florio of Pro Football Talk sheds a little light on the subject today, reporting that the Lions want to know whether they have to match all the specifics of a Bucs’ offer that includes de-escalators in the second and third years of the deal. Per Florio, the three-year, $9MM proposal could shrink to $7MM over three years if the de-escalators are applied, so depending on how an arbitrator rules, Detroit may only have to match that lower $7MM figure.

As we wait for resolution on Johnson, which should come by the end of next week, let’s break down a few more new contracts from around the NFL…

The Jets have signed free agent linebacker Jamari Lattimore, agent Tony Agnone tells Tom Silverstein of the Milwaukee Journal Sentinel (Twitter link). We heard two weeks ago that Lattimore was paying a visit to New York to meet with the Jets.

Lattimore spent the last four seasons with the Packers, playing in 49 regular season contests for the team. Playing on a one-year RFA tender in 2014, the 26-year-old earned 285 defensive snaps and played on special teams before landing on injured reserve, prematurely ending his season. Lattimore had 37 tackles and an interception for the year.

The Jets have signed plenty of defenders in free agency over the last few weeks, though most of those new additions are either defensive backs – such as Darrelle Revis, Antonio Cromartie, and Buster Skrine – or defensive lineman, like Stephen Bowen and Kevin Vickerson.

The Bills have lost sight of value with their offer sheet to Dolphins tight end Charles Clay, Mike Rodak of ESPN.com writes. The Bills can afford the deal under the 2015 cap and they should benefit from the projected growth of the NFL’s cap over the next several years, but it will be difficult for Clay to live up to that massive five-year, $38MM pact. Here’s more from the AFC East..

Here are Saturday’s minor moves, with the most recent transactions added to the top of the list: