All three veterans cut today by New Orleans have appeared in regular-season NFL games. Ballard notably ran for 814 yards and a pair of touchdowns during the 2012 season, when he served as the Colts’ primary back for most of the year. Hunt, 30, has been a part-time player for the Eagles and Lions in parts of four seasons since 2011, picking up four career sacks. Opurum, meanwhile, appeared in his first two regular-season games for the Saints in 2015.

As for the Saints’ draft pick signings, Rankins’ deal represents the most significant of the three, of course — it’s worth $12.802MM over four years, with a $7.51MM signing bonus and a fifth-year option for 2020. Thomas will receive a signing bonus of $1.923MM on his four-year rookie pact, while Lasco will get a modest $75K bonus.

No NFL team had a smaller 2016 draft class than the Saints, who selected just five players, so New Orleans has now locked up more than half of its draftees.

The Saints have signed running back Vick Ballard to a reserve/futures deal, as Evan Woodbery of The Times-Picayune writes. 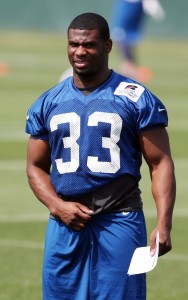 After consecutive years of tearing his ACL, Ballard’s status with the Colts was said to be on the rocks prior to the 2015 season thanks to a hamstring injury. Ultimately, he was unable to make an impression on the coaching staff and front office in the offseason and his health situation led him to getting waived in mid-September.

Ballard, 26 in July, broke out in 2012, his rookie season with the Colts. The fifth-round draft pick ran for 814 yards off of 211 carries, good for an average of 3.9 yards per attempt. However, he has yet to do much ever since thanks to the aforementioned ACL problems. He did not sign with another NFL team last season and, last we heard, he auditioned for the Bears in December. Nearly five months later, he has finally found his new NFL home.

Reserve/futures contracts essentially function like regular free agent deals, except that only players who didn’t finish the previous season on an NFL team’s active roster can sign them. So a player on a practice squad could ink a futures contract, and many have in recent weeks. These deals are known as “futures” contracts because they don’t technically go into effect until the new league year begins. For more on reserve/futures deals, check out this detailed explanation from Pro Football Rumors.

Clubs continue to update their emergency lists as the season winds down, so let’s take a look at the latest workouts from around the league…

Earlier tonight, the Rams announced that they will be benching quarterback Nick Foles in favor of backup Case Keenum. However, coach Jeff Fisher told reporters that, at some point, Foles will resume starting duties.

“Nick also understands that he eventually will be under center for us again,” Fisher said (via Mike Florio of PFT). “But this is my decision based on what I think is best for this team offensively is to go this direction.”

While we wait to see how things shake out in St. Louis, here’s more from around the NFL:

As usual, plenty of teams around the NFL are shaking up their rosters a little on the Tuesday following a full slate of games. Here are today’s minor moves:

The Colts have waived running back Vick Ballard with an injured designation, Ian Rapoport of NFL.com tweets.

After consecutive years of tearing his ACL, Ballard’s status with the Colts was said to be on the rocks this summer thanks to a hamstring injury. Ballard was unable to make an impression on the coaching staff and front office in the offseason and now, the injury bug has him jettisoned from the Colts’ roster.

Ballard, 25, broke out in 2012, his rookie season with the Colts. The fifth-round draft pick ran for 814 yards off of 211 carries, good for an average of 3.9 yards per attempt. However, he has yet to do much ever since thanks to the aforementioned ACL problems.

X-rays on Arthur Jones ankle were negative, but the Colts defensive lineman also had an MRI scheduled for Sunday, per Ian Rapoport of NFL.com (via Twitter). Josina Anderson of ESPN reported that Jones went to a foot and ankle specialist after his MRI (via Twitter). He is expected to miss a “decent chunk of time” according to Jason La Canfora of CBS Sports (via Twitter).

A week after losing Pro Bowl receiver Jordy Nelson to a season-ending ACL injury, the Packers are hoping fellow Pro Bowl wideout Randall Cobb doesn’t join him on the shelf. Cobb suffered a right shoulder injury during the Packers’ game Saturday against Philadelphia. The severity of the ailment is currently unknown, but one injury that has been ruled out is a broken collarbone, Ian Rapoport of NFL.com tweeted. A serious injury to Cobb would be a devastating blow to the Packers, given that their receiving corps already lost Nelson. He and Cobb combined for a whopping 189 catches (25 of which were touchdowns) and nearly 3,000 yards last year.