The Panthers announced that they’ve signed safety Marcus Ball from their practice squad, adding him to their 53-man roster in advance of Week 3. Ball will fill the roster spot vacated by fellow defensive back Dean Marlowe, who was placed on injured reserve earlier this week. 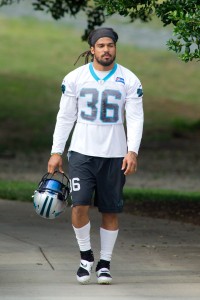 Ball, 29, has spent his entire career in the NFC South since migrating from the CFL to the NFL in 2014. He appeared in 12 games (two starts) with the Saints that year, posting 12 tackles and a fumble recovery, but hasn’t seen game action since. Ball spent the duration of the 2015 campaign on Carolina’s practice squad, and re-signed on a futures deal in January.

During that 2014 season, Ball played on nearly half of the Saints’ special teams snaps (fourth-most on the team), and that’s likely the role he’ll play on Sunday against the Vikings, backing up starters Kurt Coleman and Tre Boston along with fellow reserve Colin Jones.