Five years ago today, 49ers tackle Anthony Davis announced his retirement from the NFL at the age of 25. Davis’ decision came as a surprise to everyone, though he left the door open to returning at some point in the future.

Davis was the Niners’ first-round pick in 2010, coming off the board No. 11 overall. In his first four seasons, he started 71 games at right tackle and played in all 16 regular season contests. Then, in 2014, he was limited to seven games thanks to hamstring, knee, and concussion problems.

Davis was just the latest in a string of 49ers departures that offseason. First, head coach Jim Harbaugh exited. Then, linebackers Chris Borland and Patrick Willis retired, despite still likely having a few good years of production ahead of them. Davis was similarly concerned about the toll the game had taken on him, though he attempted to come back to football the following year in 2016.

Davis and the Niners weren’t quite on the same page. Before the draft, Davis took to Twitter and suggested that the Niners should take an offensive tackle in the Top 10. Then, he took an even more direct shot at the team: “I do not want to work with a front office or anyone else who seemingly doesn’t want to win as bad as I do.”

The Niners, meanwhile, weren’t so thrilled with him either. When asked about Davis’ potential return, 49ers offensive line coach Pat Flaherty said that nothing would be handed to him.

Davis’ return to the Niners lasted only one game. After appearing in the season opener against the Rams, Davis retired for a second time. In May of last year, Davis said he wanted to return to the field and the 49ers released him from his deal. Davis, 31 in October, didn’t sign with another club and remains a free agent today, though it’s not clear if he still has interest in playing.

The 49ers have released offensive tackle Anthony Davis, according to Field Yates of ESPN.com (on Twitter). With that, the 29-year-old is now a free agent and eligible to speak to other teams. The NFL reinstated Davis from the reserve-retired list Tuesday.

Davis announced his retirement after the 2014 season and returned for one game in 2016 before retiring once again, citing concerns about concussions. But, earlier this month, Davis filed paperwork for reinstatement.

This does throw an interesting lineman into the free agent mix, based strictly on his work when he was a full-time starter. But that was five years ago.

The No. 11 overall pick in the 2010 draft, Davis played 16 games as San Francisco’s starting right tackle for four straight seasons. He started in each of the 49ers’ three NFC championship games earlier this decade and Super Bowl XLVII. But since the end of the 2013 season, Davis has played just eight games.

Coming into the NFL as a 20-year-old rookie nine years ago, Davis will not turn 30 until midway through this coming season. But it will obviously be difficult for a team that considers him to be convinced he will stick with football. That said, any Davis deal would likely qualify as a flier and be a low-risk addition, financially speaking. The Saints signed Derek Newton last year, after the former Texans right tackle starter missed more than two years due to severe knee injuries. Without those kind of injury concerns, it would not be too difficult to see a team inquiring about Davis.

Anthony Davis is attempting another comeback. Not the NBA superstar, but the former 49ers offensive tackle. Davis is un-retiring and has filed paperwork to be reinstated by the league, per Mike Florio of ProFootballTalk.com.

Davis was the 11th overall pick of the 49ers back in 2010, so this is pretty notable. The Rutgers product became an immediate starter in San Francisco, starting all 16 games at right tackle in each of his first four seasons in the league. He started for the 49ers in Super Bowl XLVII. After the 2014 season, Davis announced his intention to retire, citing his health as the main reason for walking away.

He briefly attempted a comeback after the 2015 season, and returned to the 49ers. He played in just one game in 2016 before stepping away again. Davis sent a letter to commissioner Roger Goodell explaining his decision, which Florio obtained. In it, he seemed to indicate that concerns about concussions were at least partially what was keeping him away.

“On January 24, 2019, I read articles by 3 different sources pertaining to there being a significant decrease in concussions in the NFL, down by 29 percent in the 2018 season,” Davis wrote. “Excited to see that the changes you and your staff have made to the rules, and the allowance of safer equipment to be worn has had a positive effect, I confided with my family and on January 28, 2019 I made the decision that I’d love to play in the NFL again.”

Davis sustained a concussion in Week 1 of 2016, so this makes sense. He hasn’t played in a few years, but he’s still only 29. He’s always been high on talent, so he should be able to get a look from somebody assuming he follows through with his decision.

Rams owner Stan Kroenke only relocated the franchise from St. Louis to Los Angeles last winter, but his plan to swap Missouri for California went back several years, ex-head coach Jeff Fisher told ESPN Radio (via Ben Frederickson of the St. Louis Post-Dispatch). On taking the Rams’ head coaching job in 2012, Fisher recalled, “I decided on L.A., or St. Louis, at the time, knowing that there was going to be a pending move.”

7:32pm: Davis’ retirement stems somewhat from the concussion he suffered earlier this season. “I just want to keep my time and mind intact,” Davis posted on Twitter. He suffered a concussion in practice Sept. 15, per Eric Branch of the San Francisco Chronicle, and didn’t practice with the 49ers after that injury.

6:41pm: Stop us if you’ve heard this one before. The 49ers announced that offensive lineman Anthony Davis is retiring from the NFL.

Davis, a first-round pick in 2010, originally announced his retirement during the summer of 2015, citing injury concerns. He returned to the 49ers this offseason and it’s not quite clear if both sides were happy with the reunion. New coach Chip Kelly asked Davis to move over to the interior line and he may or may not have been acting in protest when he missed a crucial practice prior to the season-opener.

Davis, 27 in October, has not seen the field since SF’s strong debut against the Rams. Prior to tonight’s surprising announcement, he was considered to be questionable for this week’s matchup against the Cowboys due to concussion-like symptoms. Davis missed nine games in 2014 due to injury and called his retirement a break for his body and brain.

The Rutgers product has had an unusual career to say the least, but he is ostensibly putting his long-term health ahead of his football aspirations with today’s announcement. We here at PFR wish Davis the best in retirement.

After playing in his first game since 2014, 49ers offensive tackle Anthony Davis will likely miss this weekend’s contest against the Panthers. According to Matt Barrows of SacBee.com, Davis suffered a concussion during practice this week and has been ruled out for Sunday’s game.

It’s been a hectic start of the season for the 26-year-old. The lineman ended his brief retirement this offseason, but he reportedly missed a crucial practice prior to his team’s season-opener. Davis’ concerns apparently stemmed from his displeasure at playing offensive guard, although the lineman and coach Chip Kelly described the absence as a “miscommunication.” Davis ultimately served as the team’s reserve offensive tackle during their first game.

Davis, a first-round pick in 2010, had started all 71 of his NFL appearances prior to last weekend’s game. The lineman had originally announced his retirement during the summer of 2015, citing injury concerns.

With Davis out of the picture for this weekend’s game, the 49ers will likely rely on Trenton Brown and rookie John Theus to cover the offensive tackle spots. 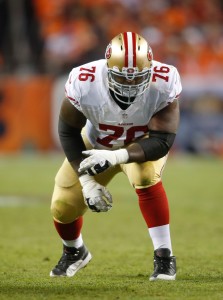