Rex Ryan is out and the quarterback that he championed could also be a goner in Buffalo. The Bills are planning to bench Tyrod Taylor against the Jets on Sunday in favor of E.J. Manuel, league sources tell Adam Schefter of ESPN.com (Facebook link). This is a business decision so the Bills are not at risk for the $30.75MM left on his contract that would become guaranteed if Taylor suffered a significant injury, Schefter adds. 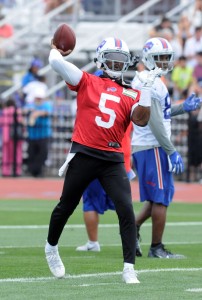 The Bills are on high alert after watching Marcus Mariota and Derek Carr suffer major injuries in Week 16. The Bills are not going to take any chances with Taylor, a player who may not be in their plans for 2017. It’s not certain that Taylor is out of the picture, but it would be understandable if the Bills do not want to retain him at his current salary. This will also give Buffalo a chance to get one last look at Manuel, a pending free agent.

Initially, the Bills planned to give Taylor the final month of the season to audition himself.

“He’s got four more games to write this chapter. Then after this season, like everybody on the team, we’re going to do an evaluation and then we’ll go from there,” Whaley said on Dec. 9 in an interview where he declined to commit to Taylor for 2017.

It is somewhat surprising that rookie Cardale Jones will not be given the opportunity in Week 17. The Ohio State product may be No. 2 on the depth chart, however, if the team is truly intent on protecting Taylor from injury.

10 comments on “Bills To Bench Tyrod Taylor In Final Game”