“Chargers GM Tom Telesco acknowledged ongoing talks with TE Antonio Gates’ representation Thursday, but no deal” tweets Eric D. Williams of ESPN. Telesco also added that he believes Gates “can still be effective in the Chargers’ offense.” The Chargers looked set to move on earlier this offseason, but then Hunter Henry was lost for the season with a torn ACL. The team immediately expressed interest in bringing back Gates, but things have been slow moving ever since.

It’s unclear what is holding up contract talks, but it’s not a huge deal for a player who’s been around as long as Gates has to miss some of training camp. Perhaps he just wants to wait as long as possible and put little wear on his body before returning right before the regular season. Gates has said he has no intention of retiring, and it’s extremely unlikely he signs with any other team than the Chargers. A deal should get done at some point, and it would be a surprise if it isn’t announced soon. The future Hall of Fame inductee turned 38 in June.

The CFL’s Saskatchewan Roughriders have signed running back Trent Richardson, as Adam Caplan of ESPN.com tweets. The former first-round pick has not played in an NFL game since 2014. 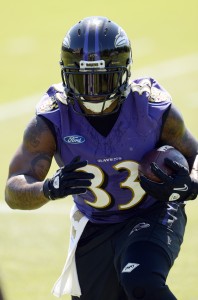 Last summer, Richardson vowed to turn over a new leaf and embark on an unprecedented comeback path that would end with his induction in the Hall of Fame. Those plans hit a snag when Richardson was released by the Ravens in August and arrested in February of this year.

The CFL’s league office reportedly blocked teams from pursuing Greg Hardy due to his history of domestic violence. They have not gotten in the way of the Roughriders signing Richardson, though the allegations against him were also ugly. Richardson’s victim was found with scratches and bruises on her face when Alabama cops responded to a 911 call. Apparently, the pair started arguing in an Alabama Walmart before things turned physical in their hotel room.

Richardson, the former No. 3 pick in the 2012 draft, has never done much at the NFL level. He appeared in 46 games for the Browns and Colts and averaged just 3.3 yards per carry.

Trent Richardson‘s latent dream of reaching the Hall of Fame has hit another roadblock. The running back was arrested Thursday night in Alabama on a domestic violence charge, as Carol Robinson of AL.com writes.

Upon responding to a 911 call from a hotel, police found Richardson and an adult female in a loud, heated argument. After interviewing both parties, cops ascertained that the dispute began at a local Walmart and eventually turned physical. The female involved had scratches and bruises on her face.

Richardson, 26, was “cooperative” and “arrested without incident,” according to police, but he potentially faces a world of legal trouble, not to mention sanctions from the NFL. Even if he avoids legal/league punishment, he has tipped his risk/reward ratio so far that it’s hard to imagine any team going near him this year. Although he was the No. 3 pick in the 2012 draft, he has never produced at the NFL level. He appeared in 46 games for the Browns and Colts, but he has not seen NFL action since 2014.

Last summer, Richardson was in camp with the Ravens before undergoing arthroscopic surgery. Months after his release, he had a fruitless audition with the Chiefs. Today’s unfortunate news is the first we’ve heard from Richardson since November.

Richardson underwent arthroscopic knee surgery to repair an existing condition, putting him on the shelf at a time when he was fighting for a spot on the Ravens‘ roster. Richardson, who just turned 26, agreed to a one-year contract for the veteran’s minimum earlier this offseason, joining a Baltimore running back corps that already included Justin Forsett, Javorius Allen, Lorenzo Taliaferro, Terrance West, and rookie Kenneth Dixon, as shown on Roster Resource. Richardson may be given an injury settlement along with his release.

In an interview in June, Richardson vowed to end his NFL story by “putting on a yellow jacket” at a Hall of Fame induction ceremony.

“People wrote him off, he came back and did some amazing things. He always had the pedigree. He just had to get back to the guy that we know,” Richardson said, narrating his own hypothetical 30 for 3o.

T-Rich, the former No. 3 overall pick of the 2012 draft, has a career average of just 3.3 yards per carry, and it remains to be seen whether he will be given another shot in the NFL.

The Ravens‘ decision to cut Eugene Monroe had nothing to do with his position on medical marijuana and was simply a football determination, head coach John Harbaugh told reporters, including Clifton Brown of CSNBaltimore.com (Twitter link). Clearly, that statement has generated a few doubting looks around the NFL, especially because Baltimore made mention of Monroe’s pro-marijuana stance in their press release announcing the move. However, reports did indicate that the Ravens wanted to wait until Monroe was cleared from a health standpoint before releasing him, and that clearance was apparently received this week. Baltimore’s offensive line will feature two new starters in 2016, with rookie Ronnie Stanley taking over at left tackle while John Urschel mans left guard.

Safety Eric Weddle spurned other teams’ offers to sign a four-year, $26MM with the Ravens during the winter. One of the clubs that had interest in Weddle was the hated AFC North rival Steelers, and the three-time Pro Bowl defender revealed today that he and Ben Roethlisberger talked throughout the free agent process (via Jamison Hensley of ESPN.com). “Hopefully I get a lot of wins and interceptions against him,” said Weddle. “And maybe sprinkle in a few touchdowns.”

More on the two standouts’ teams: