After placing Charles Sims on the injured reserve earlier this week, the Buccaneers are searching for some help at running back. NFL.com’s Ian Rapoport reports (via Twitter) that the team will be working out free agent running back Terrance West today.

West was initially signed by the Saints back in June after Mark Ingram was hit with a four-game suspension, but he was cut loose by the organization earlier this week. The 27-year-old appeared in only five games (four starts) with the Ravens last year, compiling 138 rushing yards and two touchdowns on 39 carries. He was significantly more productive with Baltimore in 2016, finishing with 1,010 yards on offense and six touchdowns.

The Buccaneers have Peyton Barber, rookie Ronald Jones, and Jacquizz Rodgers effectively locked in for the 53-man roster. If the team brings in West, he’ll presumably be competing for the fourth spot on the Bucs’ depth chart, competing with a grouping that includes Dare Ogunbowale and Shaun Wilson.

Sims suffered a knee injury earlier this preseason, leading to his placement on the IR. The running back appeared in all 16 games last season, totaling just 21 rushing attempts for 95 yards. He added another 35 catches for 249 yards and one score. 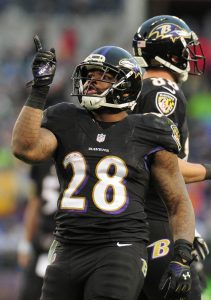 The Saints are signing running back Terrance West, according to a source who spoke with NFL.com’s Herbie Teope (on Twitter). There was some question on Wednesday as to whether the contract was official, but Ian Rapoport of NFL.com (on Twitter) hears that it’s a done deal. West was among the veterans running backs worked out by the Saints this week. 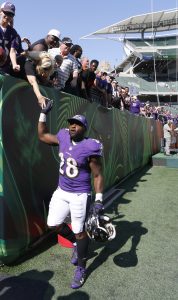 If he sticks on the roster, West will help to fill the void left by Mark Ingram‘s four-game suspension. Presumably, this means that the Saints will not be signing the other running backs auditioned this week such as Tim Hightower and Jamaal Charles. The Saints also asked DeMarco Murray to come show his stuff, but he declined the invite.

West is looking to rebound from an injury-shortened campaign in 2017. Although he was the Ravens’ leading rusher in 2016, he’ll be in line for a much more modest role if he makes the 53-man cut in New Orleans.

Although the complete order is yet to be determined, the Saints’ running back depth chart now consists of Ingram, Alvin Kamara, Trey Edmunds, Daniel Lasco, Boston Scott, Jonathan Williams, and West. Fullback Zach Line is also in the mix, though he’s not a lock to make the roster as his two-year deal contains just $200K in guaranteed money.

The Saints’ search for an Alvin Kamara sidekick during Mark Ingram‘s suspension has operated in high gear this week, with several running backs contacted for workouts. But the one they’ve reportedly agreed to sign — Terrance West — may not be New Orleans-bound just yet.

West’s deal is not finalized, Mike Triplett of ESPN.com and The Advocate’s Nick Underhill report (Twitter links). While Triplett notes a deal could come to fruition, it hasn’t yet despite a report of the sides reaching an agreement emerging Wednesday afternoon.

Additionally, Triplett reports Shane Vereen worked out for the Saints on Wednesday. He joins West, Jamaal Charles and Tim Hightower among UFA backs to audition for New Orleans. DeMarco Murray declined to be a part of this process.

Charles also could be a candidate for the Saints, assuming their West accord doesn’t come to fruition. The two-time All-Pro enjoyed a good workout, Herbie Teope of NFL.com tweets, and the injury-prone runner passed his physical. Teope adds a signing didn’t make sense for either side but could be revisited down the road. This would be Charles’ 11th season, should he land with a team.

This is the first known workout Vereen’s participated in since his Giants contract expired after the 2017 season. Vereen’s skill set is somewhat similar to Kamara’s; he’s functioned as a passing-down back in New England and New York. But nevertheless, the 29-year-old has seven years’ experience. However, he only posted 417 yards from scrimmage last season and missed 11 games in 2016.

The Saints are doing their homework on free agent running backs. Terrance West is scheduled to visit the Saints on Wednesday, a source tells ESPN.com’s Adam Schefter (on Twitter).

News of West’s impending visit comes hours after word of Tim Hightower‘s Tuesday tryout and Jamaal Charles‘ Wednesday tryout emerged. The Saints were said to be content with their group of running backs despite Mark Ingram‘s four-game ban to start the season, but that might not be the case.

The Saints’ running back group presently consists of Ingram, young star Alvin Kamara, Trey Edmunds, Daniel Lasco, rookie Boston Scott, and Jonathan Williams. If there is a running back to be added, Hightower’s familiarity with the offense could give him a leg up, but the experience of Charles and the past performance of West could give the Saints something to think about.

West met with the Colts, Eagles, and Jaguars in the spring, but has yet to sign with any club this offseason.

Terrance West‘s free agent tour will continue in the AFC South. The former Ravens running back will meet with the Jaguars on Wednesday, according to Ian Rapoport of NFL.com (on Twitter).

West met with the Colts on Tuesday and also sat down with the Eagles earlier this month. The running back is likely looking for a shot at playing time on a one-year deal, which would give him the opportunity to potentially do better in free agency next year.

The Jaguars have Leonard Fournette as their primary running back with T.J. Yeldon and Corey Grant in support, but things are fairly open after that. Three players who entered the league as UDFAs – Brandon Wilds, Tim Cook, and Lamar Atkins – are in the running for the final spots on the RB depth chart. West could help fortify that group with his powerful running style and pass-catching acumen.

Former Ravens starting running back Terrance West visited the Colts on Tuesday, a source tells Ian Rapoport of NFL.com (on Twitter). West also met with the Eagles last week, so it sounds like his market is starting to pick up.

At this stage of the offseason, the signing of unrestricted free agents no longer counts against the 2019 compensatory draft pick formula. While West has talent, it seems that teams were waiting out the deadline before engaging with him.

In 2016, West led the Ravens in rushing attempts (193), yards on the ground (774) and rushing touchdowns (five). Last year, however, he averaged just 3.5 yards per carry off of 39 attempts and his season ended in October due to a calf injury.

The Colts will use Marlon Mack as their primary running back this year with Robert Turbin and fourth-round rookie Nyheim Hines mixed in. Christine Michael, fifth-round pick Jordan Wilkins, and Josh Ferguson jockeying for position behind them.

Free agent running back Terrance West took a free agent visit with the Eagles on Tuesday, a source tells Jeff Zrebiec of The Baltimore Sun (on Twitter). West, a former third-round pick of the Browns, has spent the last two-and-a-half seasons with the Ravens.

The 2016 season marked West’s first campaign in Baltimore and he led the team’s ball carriers in attempts (193), yards (774) and touchdowns (five) in that campaign. Last year, he had 39 carries until a calf injury in October took him out of the equation. Wets averaged just 3.5 yards per tote in 2017 after a respectable 4.0 yards-per-carry average in the previous year.

The Eagles seem fairly set at running back with Jay Ajayi as their main carrier and Corey Clement, Darren Sproles, Wendell Smallwood, and D.J. Pumphrey in support. However, Sproles is looking to return from a a torn ACL and his status for the start of the season is unclear.

There hasn’t been much buzz around West this offseason, but he could see an uptick in interest this week along with other low-priority unrestricted free agents. Per league rules, UFAs no longer count against the compensatory pick formula once the second Tuesday after the NFL draft arrives.

Following yesterday’s five-interception against the Jaguars, Steelers quarterback Ben Roethlisberger offered a concise report of his performance. “Maybe I don’t have it anymore,” Roethlisberger told Aditi Kinkhabwala of NFL.com (Twitter link). While Roethlisberger could have been hoping for levity after a brutal loss, the comments do call into question just how much longer Roethlisberger will play, especially given that he’s contemplated retirement on multiple occasions. As Mike Florio of Pro Football Talk writes, the idea of forfeiting bonus money could have swayed Roethlisberger into continuing his career in 2017, but that concept will continue in the next few years. If Roethlisberger hangs up it after this season, for example, he’d owe the Steelers $12.4MM in bonus money (of course, Pittsburgh isn’t obligated to collect that total).