There is a chance that Pittsburgh’s 36-17 loss to New England in Sunday’s AFC title game will go down as the final contest of Steelers quarterback Ben Roethlisberger‘s career. In an interview with 93.7 The Fan in Pittsburgh, Roethlisberger was unwilling to commit to returning in 2017 for what would be his age-35 season. 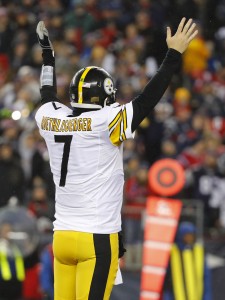 “I’m going to take this offseason to evaluate, to consider all options,” he said (via CBS Pittsburgh). “To consider health, and family and things like that and just kind of take some time away to evaluate next season, if there’s going to be a next season.”

This isn’t the first time Roethlisberger has told Mike Tomlin he’s contemplated retirement after a season, Ed Bouchette of the Pittsburgh Post-Gazette tweets. Tomlin, though, said he’s taking this seriously but isn’t alarmed or surprised by the indecision, Bouchette relays (Twitter links).

If there isn’t a next season for Roethlisberger, it would heavily affect the Steelers and the rest of the NFL, of course. Pittsburgh has regularly been a league superpower since it drafted Roethlisberger 11th overall in 2004, having finished with no fewer than eight wins during any of his 13 seasons and gone to the playoffs nine times. Two of those postseason trips have culminated in Super Bowl victories, the latest of which came at the conclusion of the 2009 campaign.

Roethlisberger has missed a combined six games because of injuries over the past two seasons, but his production has remained strong. He’s now fresh off his fifth Pro Bowl season, in which he completed 64.4 percent of his 509 passing attempts, amassed 3,819 yards on 7.5 YPA, and tossed 29 touchdowns against 13 interceptions.

In the two games Roethlisberger sat out in 2016, the Steelers turned to backup Landry Jones, who has been a mixed bag in 15 career appearances and also isn’t guaranteed to return to the club next season. Unlike Roethlisberger, Jones is set to become a free agent. Roethlisberger has three years remaining on the contract extension he signed in 2015. He’d owe the Steelers $18.6MM if he were to walk away, according to Jason Fitzgerald of Over the Cap (Twitter link), which makes an early exit seem unlikely.