“We began this journey at 6 years old and now, at 31, we will close this chapter of our lives.” Mike wrote. “I am thankful for everything football has taught me and everywhere it has taken me! Dream big, kids, because [dreams] do come true..Never be afraid to make a mistake, learn from them, and fix it!“ 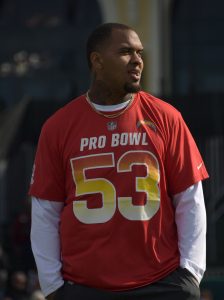 Chargers center Mike Pouncey missed practice this week with a hip injury, and he’s likely to also miss the season opener against the Bengals, Adam Schefter of ESPN.com tweets. The severity of the injury isn’t immediately clear, but history suggests that this could be another long recovery for the four-time Pro Bowler.

Pouncey’s hip limited him to just five games in 2016 and clearly hindered him in 2017, his final year with the Dolphins. In 2018, his first year with the Chargers, he was back to his usual self. Starting in all 16 games, Pouncey was named to his first career Pro Bowl. Then, last year, a neck injury shut him down after just five games.

At one point, doctors advised Pouncey that he would eventually need hip replacement surgery. Hopefully, that day never comes. At minimum, Pouncey is hoping to stave off anything major until later in life. Last year, Pouncey re-upped with the Chargers on a one-year, $9MM extension. After 2020, he’ll be out of contract and eligible for free agency.

The Bolts are already without star safety Derwin James, so they’ll have to get by without some of their best talent on both sides of the ball. After passing on interior offensive lineman in this year’s draft, the Chargers may look to slide Dan Feeney from left guard to center.

Chargers center Mike Pouncey, who missed most of the 2019 season with a neck injury, has been medically cleared, as Pouncey himself told reporters this morning (Twitter link via Ian Rapoport of NFL.com). In April, GM Tom Telesco provided a positive status report (Twitter link via Fernando Ramirez of NBC Sports), and Pouncey has now taken the last step in his recovery.

Pouncey, a four-time Pro Bowler, suffered the neck injury in an early October game and was forced to undergo surgery. It was just one of several injuries for the Bolts in 2019, but this one was serious enough to have lifelong ramifications. Fortunately, Pouncey appears to have dodged a major bullet.

Pouncey spent his first seven NFL seasons with the Dolphins before his release in 2018. The Chargers gladly picked him up off the pile and he turned in a Pro Bowl performance for his new team. Then, before the start of last season, he inked a one-year, $9MM deal to extend his stay through 2020.

When Pouncey went down last year, the Chargers moved Dan Feeney from left guard to the middle to replace Pouncey, and plugged Forrest Lamp into Feeney’s spot. They also used 2018 fifth-round pick Scott Quessenberry to help fill the void. Of course, they will be much better off with the 30-year-old (31 in July) on the field.

The Bolts did not select an interior offensive lineman in this year’s draft, which is perhaps indicative of their faith in Pouncey’s successful return.

Chargers head coach Anthony Lynn spoke at length with reporters yesterday, and two of the most significant topics he covered were the team’s quarterback situation and center Mike Pouncey‘s status. 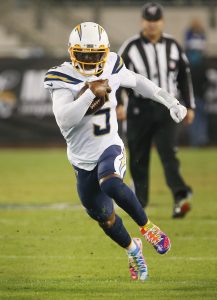 Pouncey, who spent the first seven years of his career with the Dolphins, was released by Miami in March 2018 and quickly caught on with the Chargers. The pickup proved to be a savvy one for the Bolts, as Pouncey rewarded the team with a Pro Bowl performance and agreed to a one-year extension prior to the 2019 campaign that kept him under club control through 2020.

Unfortunately, the 2019 season did not go as planned for Pouncey or the Chargers. Pouncey landed on IR with a neck injury that required surgery, and as Lynn observed, the 30-year-old pivot has not yet been cleared for football activities (Twitter link via Jeff Miller of the Los Angeles Times). However, Lynn does expect Pouncey to be cleared by the time players reconvene — whenever that is — and he suggested that he is comfortable with the club’s other options in the event Pouncey is not ready to go. Dan Feeney, currently penciled in at left guard, and 2018 fifth-rounder Scott Quessenberry combined to fill the void left by Pouncey, but neither player performed particularly well in that role.

As for the team’s QB situation, Lynn confirmed that Tyrod Taylor is the team’s starter for now, as Lindsey Thiry of ESPN.com writes. That is not at all surprising given that the only other signal-caller currently on the roster is 2019 fifth-rounder Easton Stick, but Lynn did create a little intrigue. Per Thiry, Lynn was asked specifically about the Chargers’ interest in Cam Newton, and after initially avoiding a similar question, Lynn said, “[w]e’re looking at everybody. I want to turn over every single rock, so yeah, we’re looking at everybody.”

More likely than not, that statement is basic coach-speak. After all, we heard just a couple of weeks ago that the Chargers have no intention of acquiring another veteran QB to compete with Taylor, and it seems more plausible that the club will select a QB with the No. 6 overall pick and roll into the 2020 season with Taylor and the rookie passer at the top of the depth chart. On the other hand, Los Angeles is built to win now, and its offseason moves were clearly made with an eye towards competing in 2020. If healthy, Newton is a dramatic upgrade over Taylor — whose release would free up $5MM of cap space — so it stands to reason that Lynn would at least consider that option.

With the majority of the NFL beginning their 2019 campaigns tomorrow, a number of teams have slightly tweaked contracts in an effort to open some extra cap space. We’ve compiled some of the notable restructured contracts from this morning, along with some details on some recently-completed deals.

The Chargers are signing center Mike Pouncey to a one-year, $9MM extension that ties him to the team through the 2020 season, Adam Schefter of ESPN.com tweets. Pouncey, one of the best centers in the game, was originally set to reach free agency after the 2019 campaign.

The Bolts picked up Pouncey in March of 2018 with a two-year, $15MM deal that included $10MM fully guaranteed. Pouncey earned his fourth Pro Bowl nod last year and the deal proved to be a brilliant one for LA. This time around, Pouncey gets a pay bump, but it’s still a worthwhile investment for GM Tom Telesco & Co.

Even though the club worked something out with their center, they’re still refusing to talk with star Melvin Gordon about a possible extension.

In other Bolts news – the club was forced to place safety Derwin James on injured reserve over the weekend. Fortunately, James is expected to recover in time to return in the middle of the season.

A look at some items out of the AFC and NFC East: