11:09am: One of the other linebackers being worked out is Jerry Franklin, who previously spent time with the Lions (via Salguero on Twitter).

10:53am: Spikes is one of three linebackers working out for Miami today, Armando Salguero of The Miami Herald tweets.

9:58am: Linebacker Brandon Spikes worked out for the Dolphins today, a source tells Ian Rapoport of NFL.com (on Twitter). The audition marks Spikes’ first workout after a year removed from football. 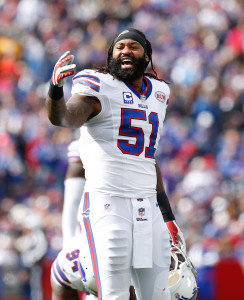 Spikes signed a one-year deal to return to the Patriots in May 2015. However, Spikes was involved in a hit-and-run incident weeks later, which quickly led to his release from the team. Luckily for all parties, the three people involved in the crash only suffered minor injuries, allowing Spikes to get one year of probation rather than a maximum sentence of two years in jail. Spikes was hit with a four-game suspension in 2015 after the incident, though it didn’t mean much since he was without an NFL home.

While he’s typically taken off the field in passing downs, Spikes has proven himself to be an effective part-time player, specializing as a run defender. Before signing with New England in the summer of 2015, the Dolphins were among the teams to show interest in him.

On an admittedly small sample of passing downs, the advanced metrics from Pro Football Focus (subscription required) were actually kind to Spikes’ pass-coverage abilities in 2014, as he ranked fourth-best at his position in yards per coverage snap and coverage snaps per reception. Still, you can expect to see him mostly against the run if he is given another NFL shot. Overall, he graded as PFF’s 13th-best inside linebacker in the league in 2014 thanks to his run-stopping ability. Spikes finished ninth against the run at his position in 2014 and ranked No. 1 against the run in both 2012 and 2013.