This week, there were rumblings about Patrick Peterson and the Cardinals agreeing to part ways. However, that was nothing more than a “dirty rumor,” according to the cornerback (via the team website). 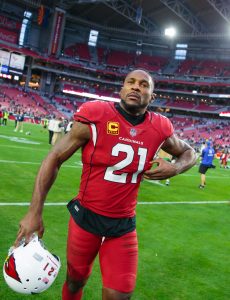 Peterson, 31 in July, is set to hit the open market in March. In 2020, he counted for a $13.2MM charge against Arizona’s salary cap. With a new multi-year deal, the Cardinals could have the flexibility to spread out the hits over time, provided that they want to move forward with him.

Drafted fifth overall by Arizona back in 2011, Peterson has become a franchise icon over the past decade. After eight Pro Bowls, three first-team All-Pro selections, and countless flare-ups with team brass, P2 says he’s open to a new arrangement. He could wind up anywhere, he concedes, but one thing is for sure — he wants to keep playing. In fact, his goal is to keep it going for another six seasons to solidify what he says is a “Hall of Fame resume.”

The Dolphins have signed third-round pick Billy Turner, agent Michael Hoffman tells Adam Caplan of ESPN.com (on Twitter). With the signing, the Dolphins have signed all of their draft picks and there are now only two undrafted picks from the 2014 class in the entire NFL: Taylor Lewan (Titans) and Justin Gilbert (Browns).

Turner, 22, was pick No. 67 out of North Dakota State, where he started 56 games across four seasons. Though he played both left and right tackle in college, he will shift to guard in the NFL. Shelley Smith is probably safe as the Dolphins’ right guard, but Turner could push Dallas Thomas for snaps on the left side.

In Miami, Turner will be part of a totally revamped offensive line. Newly signed Branden Albert will start at left tackle, Thomas and Smith will man guard, and first-rounder Ju’Wuan James will handle right tackle. Center was supposed to be the Dolphins’ most stable position along the front five, but following Mike Pouncey‘s injury, Sam Brenner will likely hold down the spot until Pouncey returns.

As we’ve discussed before when covering draft pick signings – as well as those draftees who remain unsigned – the NFL’s current Collective Bargaining Agreement has taken most of the drama out of the contracts for rookies. With set amounts on signing bonuses and total values for most rookie deals, players will haggle over things like offset language, types of payment, and guaranteed money, but for the most part, there isn’t much wiggle room.

That means that we shouldn’t expect to see many – if any – holdouts when training camps get underway later this month. Still, four of 2014’s 256 draft picks have still yet to ink their contracts, so it’s worth checking in on them to see if we can discern any particular reason why that’s the case. Here are the four draftees who remain unsigned, along with the latest updates on each of them:

Last night we not only passed along some Browns notes, but also asked whether Johnny Manziel’s off-the-field conduct was among the NFL’s most intriguing storylines. Let’s take a look at some more news from Cleveland, as well as the rest of the AFC:

2:05pm: 80% of Easley’s rookie contract is guaranteed, according to Ian Rapoport of NFL.com (via Twitter).

1:45pm: Another first-round pick has signed his rookie contract, as the Patriots announced today in a press release that they’ve locked up defensive tackle Dominique Easley. The agreement for Easley leaves just five draft picks unsigned, including two first-rounders — Justin Gilbert of the Browns and Taylor Lewan of the Titans.

Easley, 22, was drafted 29th overall by the Patriots, perhaps seeing his stock slip a little leading up to the draft because he’s recovering from a torn ACL. While the Pats may not be counting on the former Florida standout to contribute on the defensive line in New England, Easley has plenty of upside and should develop into productive regular after he gets healthy.

Per Jason Fitzgerald of Over the Cap, Easley should be in line for a signing bonus worth around $3.632MM, with an overall four-year value of $7.304MM on his rookie deal. Since Easley is a first-rounder, his pact also features a fifth-year team option, which the Pats can exercise to keep him under contract for the 2018 season.

In addition to signing Easley, the Pats filled the 90th spot on the roster by signing rookie free agent Chris Martin to a contract, the team announced. Martin, a former Central Florida offensive lineman, signed with the Texans following the draft, but was cut last month — he was reportedly waived with a failed physical designation, but presumably he’ll be healthy enough to participate in New England’s training camp next month.

The Browns announced they have agreed to terms with their second-round pick, offensive lineman Joel Bitonio (Twitter link via Nate Ulrich of the Akron Beacon Journal). According to our draft tracker, Bitonio’s signing means there are only six draft picks who remain unsigned, including one of Cleveland’s first-rounders, cornerback Justin Gilbert.

Bitonio, 22, was selected with the No. 35 overall pick out of Nevada. Though he started 38 games at tackle while in college, he is expected to serve as the left guard on the Browns’ offensive front, where he will line up between All-Pros Joe Thomas and Alex Mack. In this scenario, John Greco, who played the majority of snaps at left guard for Cleveland in 2013, will likely shift to the right side, replacing the departed Shawn Lauvao.

One of eight 2014 draftees who had yet to officially sign his rookie contract has done so today. First-round offensive tackle Ju’Wuan James tweeted out a photo that shows him inking his deal with the Dolphins, accompanied by the caption “Happy to officially be apart of the @MiamiDolphins for many years to come #FinsUp.”

James, the 19th overall selection in last month’s draft, will be in line for a signing bonus worth nearly $4.45MM, according to Jason Fitzgerald’s figures at OverTheCap.com. The four-year contract, which will include a fifth-year team option for the 2018 season, will have an overall value in the neighborhood of $8.428MM, and that total is fully guaranteed, tweets Ian Rapoport of NFL.com.

With James locked up, the Dolphins have one unsigned pick remaining, in third-round tackle Billy Turner. I wouldn’t be surprised if the club was working on finalizing that deal as well, with the intention of formally announcing both signings at once. Besides the two Dolphins linemen, six other draftees have yet to put pen to paper, including three first-rounders. You can check out our tracker for all the updates.

JUNE 12: The Bucs have agreed to terms with tight end Austin Seferian-Jenkins, according to Scott Smith of Buccaneers.com (via Twitter). An official release is expected soon.

The 21-year-old Washington standout was selected in the second round with the 38th overall pick. Like many of today’s NFL tight ends, Seferian-Jenkins has a basketball background and the 6’6″ athlete was a member of the Huskies basketball team in his frosh year. The Bucs thought highly of the underclassman and made him the second TE selected in the draft, ahead of Jace Amaro, Troy Niklas, and C.J. Fiedorowicz. Most projected Seferian-Jenkins as a second round choice but there were teams reportedly considering him in the later part of the first round.

Over the course of three seasons at Washington, Seferian-Jenkins hauled in 146 catches for 1840 yards and 21 touchdowns. His talent hasn’t been questioned but he did raise a red flag for teams in March of 2013 when he was arrested for a DUI.

After signing third round tailback Charles Sims earlier today, Tampa Bay has now signed or agreed to terms with every player in its 2014 draft class, as shown in PFR’s running list.

The Steelers have become the latest team to lock up their entire 2014 draft class, announcing today (via Twitter) that second-round defensive lineman Stephon Tuitt has signed his rookie contract.

Tuitt, 21, played his college ball at Notre Dame, racking up 19.5 sacks in his last two seasons with the Fighting Irish. As the 46th overall pick in last month’s draft, Tuitt will receive a signing bonus worth around $1.672MM, per Jason Fitzgerald’s figures at OverTheCap.com. The overall four-year value of his contract will be about $4.609MM.

I wrote yesterday that only 13 draftees remained unsigned, and since then, five more have been locked up, meaning just eight have yet to put pen to paper. Now that the Steelers have secured all their draftees, only five teams still have picks to sign.