One of the Titans’ ascending defenders has landed a new deal just before the regular season kicks off. Safety Amani Hooker has agreed to terms on a three-year extension worth $33MM, per NFL Network’s Ian Rapoport (Twitter link). ESPN’s Jeremy Fowler tweets that the deal includes $19.5MM guaranteed, and a $10MM signing bonus. 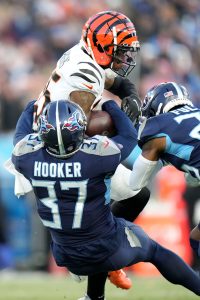 The team has confirmed the deal, which will keep Hooker on the books through 2026. A fourth-round pick of the Titans in 2019, he has taken on a larger role with each passing season over the course of his three years in the league. In 2021, he cemented his status as a full-time starter.

The 24-year-old was limited to 12 games last season due to a groin injury, but he still totaled 62 tackles, one interception and improved coverage statistics from the previous year. He and Kevin Byard have become an effective tandem on the backend of the Titans’ defense, leading to reports that Tennessee was prioritizing an extension for Hooker this offseason.

At $11MM per year on average, this deal will place Hooker in the top 15 at the safety position, one which has seen a number of massive deals this summer. Chief among those have been the record-breaking extensions given to Derwin James and Minkah Fitzpatrick, but other players such as Arizona’s Jalen Thompson have benefitted as well.

Given this new contract, and the pact Byard is playing on (which averages $14.1MM per season), the Titans will have one of the league’s more expensive safety tandems for at least the short-term future. If Hooker continues his growth over the length of the deal, however, the investment could prove worthwhile as the Titans look to remain AFC contenders.

Tennessee has a number of players that they are interested in extending over the next season and, according to Terry McCormick of Titan Insider, the Titans have already had discussions with fourth-year safety Amani Hooker.

Hooker was a fourth-round pick out of the University of Iowa in 2019. He spent his rookie season cutting his teeth as a star on special teams. In year two with the Titans, Hooker worked as a sub-package player, earning more playing time and four interceptions as a result.

Hooker started the 2021 NFL season as the team’s starter at strong safety before a Week 1 groin injury sidelined him for the next five weeks. He returned and became the fourth-leading tackler on the team despite only playing in 12 games. Hooker meshes well with free safety Kevin Byard to form one of the more formidable safety duos in the league. The Titans would certainly like to keep the two together.

Another 2019 draft pick looking to stick around is linebacker David Long Jr. Long was a sixth-round draft pick that served as a reserve linebacker and special teamer his rookie season before filling in for an injured Jayon Brown in the playoffs. In an extremely similar path to Hooker, Long earned more playing time as a substitute before ultimately earning a starting role in 2021. Long was the team’s second-leading tackler despite only appearing in 10 games last season.

The Titans will likely continue pursuing new deals for Hooker and Long in the next few weeks, but the team, as a general rule, tends not to do any contract negotiations during the season. So if any further progress is made, it will likely occur between the start of training camp and Tennessee’s home opener on September 11.