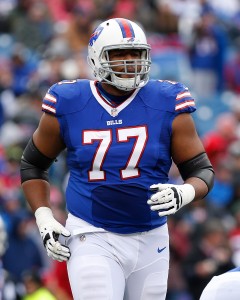 After failed attempts to trade Cordy Glenn, the Bengals will release him Friday, Adam Schefter of ESPN.com tweets. Bengals efforts to move Glenn surfaced last week, but predictably, Cincinnati could not find a taker for the tackle’s contract.

When the Bills traded Glenn to the Bengals in 2018, he was still attached to the deal he signed in 2016 after being franchise-tagged. While Glenn was only set to make $7.5MM in 2020 base salary, he missed most of last season and has seen his value drop in recent years.

The Bengals’ 2019 first-round selection of Jonah Williams prompted the team to move Glenn to guard. However, that became a short-term transition. Williams’ season-nullifying injury slid Glenn back to left tackle. But Glenn did not end up taking his place in the Bengals’ starting lineup until November. A severe concussion that led to a lengthy Glenn absence preceded a disagreement between player and team over the handling of the head injury. Glenn’s argument with a Bengals coach led to the team suspending him for a game.

Cincinnati will attempt to move on with Williams at left tackle. This will mark a reboot, with Williams likely set to protect Joe Burrow next season. Glenn, 30, will join a suddenly populated contingent of available left tackles. Both Jason Peters and Trent Williams are now on the market, via free agency or trade. Glenn was once a highly regarded tackle in Buffalo and would seemingly be a candidate for a prove-it deal.

The Bengals are looking to move Cordy Glenn, according to Jenna Laine of ESPN.com (on Twitter). The asking price probably isn’t very high; she hears that Glenn would be released outright if they’re unable to find a suitable trade.

The Bengals acquired Glenn via trade with the Bills in 2018. In the deal, they took on his five-year, $60MM contract which calls for a $9.5MM cap hit in 2020. However, it’s completely non-guaranteed, so the Bengals can wipe that sum from the books without any fiscal penalty.

In his first year with the Bengals, Glenn started in 13 games at left tackle. It was his worst year as a pro, according to the advanced metrics at Pro Football Focus that ranked him 60th among all tackles in the NFL. Last year, the Bengals planned to move him to left guard, a position he had never played before as a pro. Unfortunately, those plans were 86’d when rookie Jonah Williams was sidelined.

After that, things got contentious between Glenn and the team. Glenn missed time with a concussion and argued that the club was rushing him back too soon. When they clashed, Glenn instructed head coach Zac Taylor to cut him. Instead, the team hit him with a sizable fine and suspended him for one game.

They shopped him prior to the trade deadline but couldn’t find any takers, even though contenders like the Patriots were in need of offensive line help. They probably won’t find a robust market this time around either.

While different accounts have surfaced about how the brawl started, the NFL has issued final rulings on the central cogs in the Browns-Steelers melee. One interesting fallout item: Myles Garrett‘s appeal being denied will leave him on his own for a while. The Browns are not permitted to communicate with the star defensive end during his suspension, Freddie Kitchens confirmed (via Mary Kay Cabot of the Cleveland Plain Dealer, on Twitter). This sort of banishment is usually associated with players battling bans for off-field conduct, but Garrett’s case is certainly unique. This could prove interesting if the Browns make Kitchens a one-and-done coach. Garrett would not be permitted to discuss a new scheme with the team. With NFL appeals officer James Thrash denying the former No. 1 overall pick’s case at avoiding an indefinite suspension, Garrett must apply for reinstatement in the 2020 offseason.

With JuJu Smith-Schuster dealing with a knee injury in addition to the concussion he sustained last week, the Steelers are expected to hold him out of Sunday’s game against the Bengals, Jeremy Fowler of ESPN.com tweets. However, the third-year standout is not expected to miss much time. Smith-Schuster has not missed a game since December 2017. The Steelers are not certain to have Diontae Johnson on the field in Cincinnati either, with the rookie also in concussion protocol. For a team that has featured at least one Pro Bowl-caliber wideout in its lineup for many years, given Antonio Brown‘s presence, Sunday will be an adjustment without one.

There may be plenty of Steelers fans unhappy with head coach Mike Tomlin, but he has navigated his team through some turbulent waters over the last couple of seasons, and after starting the 2019 campaign 0-3 and losing Ben Roethlisberger to injury, Pittsburgh is now 4-4 and is back in the AFC playoff picture. As Brooke Pryor of ESPN.com writes, Steelers players believe Tomlin is in the midst of one of his finest coaching performances, and that should go a long way towards quieting outside criticism. Thanks to an (admittedly unusual) one-year extension that he signed in July, Tomlin is under contract through 2021, and his standing within the organization seems strong.

The Bengals have signed defensive end Anthony Zettel, per a club announcement. Zettel takes the place of offensive lineman Cordy Glenn, who is serving a one-game suspension for conduct detrimental to the team.

Glenn was cleared to practice last week following his concussion, but he felt the Bengals were trying to rush him back prematurely. He clashed with Bengals head coach Zac Taylor on Wednesday and, amongst other things, insisted upon his release. Glenn was fined $200K and suspended for “internal disciplinary reasons.” It remains to be seen whether he’ll be a member of the team beyond the Tuesday Oct. 29 deadline.

In the meantime, Zettel will earn at least one paycheck as the Bengals seek out their first win of the year against the 4-3 Rams.

The Bengals have suspended Cordy Glenn for one game, per a club announcement. This follows Glenn’s blowup with a Bengals coach on Wednesday.

In the press release, the Bengals said that Glenn was suspended for “internal disciplinary reasons.” The team also says it will have “no further comment regarding the suspension.”

Glenn has been sidelined with a concussion and was cleared to practice this week. The veteran tackle feels the club has been trying to rush him back prematurely, which likely fueled Wednesday’s tiff.

After that argument, Glenn’s return will not happen on Sunday against the Jaguars. It’s anyone’s guess as to whether he’ll face the Rams on Oct. 27, or if he’ll even be a member of the team after the trade deadline.