Michael Bennett got his wish. On Thursday, the Patriots agreed to trade the defensive end to the Cowboys for a seventh-round pick that can turn into a sixth-round choice in 2021, as Adam Schefter of ESPN.com tweets. 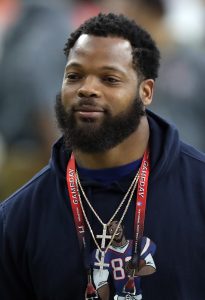 Bennett clashed with Pats brass earlier this month and led to an argument between him and defensive line coach Bret Bielema. Soon after, the veteran received a one-game suspension for airing his frustrations, which stemmed from a perceived lack of playing time.

Patriots head coach Bill Belichick has never been one to tolerate shenanigans and isn’t big into sentimentality. The team was high on Bennett after acquiring him from the Eagles in March – and even gave him a pay bump – but they haven’t had much use for him this year. The defensive end appeared in six games, but started just once. In three of those games, he saw less than 20 defensive snaps. In his last time out, against the Giants, he didn’t see the field until the second quarter.

“On Friday, I had a philosophical disagreement with my position coach that has led to my suspension,” Bennett said in a statement. “I apologize to my teammates for any distraction this may have caused.”

Apparently, the distraction was enough to earn him a one-way ticket out of Foxboro. Meanwhile, the Cowboys now have a stronger DE rotation that features Bennett, Demarcus Lawrence, Robert Quinn, Kerry Hyder, and Dorance Armstrong. Losing Tyrone Crawford for the year wasn’t ideal, but the Cowboys have gained back a lot of ground by adding Bennett to the mix.

In 2018, Bennett tallied nine sacks for Philly, marking his highest total since 2015. So far this year, the three-time Pro Bowler has 2.5 sacks on the stat sheet, giving him 65.5 in total across ~9.5 seasons.

The Cowboys are on their bye this week, so Bennett will have plenty of time to get acclimated and learn the new playbook. Then, on Monday Nov. 4, he’ll get to don his new threads for the first time when the Cowboys face the Giants. Fun fact: He faced the Giants twice last year and notched a sack in each game.