Michael Bennett has not seen the kind of role most expected when the Patriots acquired him from the Eagles, and he will miss the next Patriots game because of a suspension. 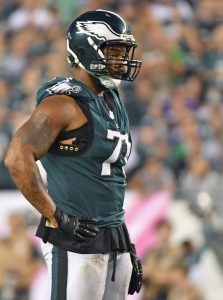 The Patriots gave Bennett a one-game suspension for conduct detrimental to the team, according to ESPN.com’s Mike Reiss. The veteran defensive end played just 11 of the Pats’ 50 defensive snaps in their Week 6 win over the Giants.

“On Friday, I had a philosophical disagreement with my position coach that has led to my suspension,” Bennett said, via ESPN.com’s Jordan Schultz (on Twitter). “I apologize to my teammates for any distraction this may have caused.”

Bennett and Patriots defensive line coach Bret Bielema‘s argument came in front of other players, per Reiss. The team watched film with coaches Friday before receiving the weekend off, but Bennett was not at Patriots practice Tuesday.

A longtime starter who played key roles with the Seahawks and Eagles, Bennett has seen fewer than 20 defensive snaps three times this season. He did not see time until the second quarter against the Giants last week. The Patriots sent a fifth-round pick to the Eagles to acquire him this year.