Bengals wide receiver A.J. Green will not make his 2019 season debut on Sunday after all, as the veteran pass-catcher told Geoff Hobson of Bengals.com (Twitter link). Green’s experienced ankle swelling during Cincinnati’s walkthrough on Wednesday, and the issue is serious enough to prevent him from playing against the Ravens in Week 10. 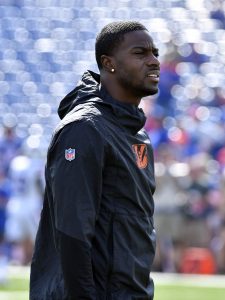 Green, of course, hasn’t played a single snap this season after suffering ankle damage during training camp. The Bengals opted not to put him on injured reserve to start the year, which would have mandated an absence of at least eight games. Green, clearly, has already missed that requisite amount of time, meaning Cincinnati has been playing a man down all year long.

The Bengals are reportedly not close to an extension with Green, who will become a free agent at season’s end. The former first-round pick has been adamant that he doesn’t want to be assigned the franchise tag next offseason, and it’s unclear if Cincinnati will honor that request.

“I don’t really care about (the contract negotiations),” Green told Jay Morrison of The Athletic (Twitter link). “If they’re worried about me not playing or not being healthy, then there’s 32 teams out there. I’m not really worried about that situation.”

Green became the NFL’s highest-paid receiver in 2015 after inking a four-year, $60MM extension, but his $15MM average annual value now ranks 11th at the position. The former No. 4 overall selection will be 32 years old when the 2020 campaign gets underway, and Green’s recent injury history — at least six missed games in 2016, 2018, and 2019 — will certainly factor into his asking price, but he should still be expected to command a lucrative multi-year deal if he does hit the free agent market.