The Bills have signed defensive end Ian Seau, according to a team announcement. He is the nephew of the late Junior Seau. 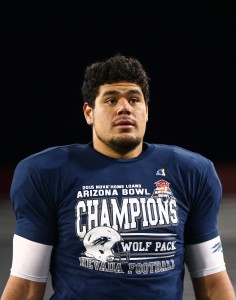 Seau joined the Rams last offseason as an undrafted free agent out of Nevada. He survived the initial rounds of cuts, but he was let go in advance of the 53-man deadline. Seau went on to audition for teams during the 2016 season, including the Broncos, but he was unable to find a new team.

Seau, a 6’3″, 250 pound lineman, had 10 sacks, 18.5 tackles for a loss, and 43 total tackles as a senior at Nevada. The Bills’ offseason workout program is already underway, so Buffalo will quickly find out what he has to offer.

Late last week, the Bills signed cornerback Marcus Cromartie plus seven other players. They also hosted quarterback T.J. Yates on a visit, but there’s no deal yet.

After including a handful of their 2016 draft picks in the trade package that allowed them to move up to No. 1 to snag California quarterback Jared Goff, the Rams only drafted six players last week, with all of them but Goff coming off the board on Day 3. However, Los Angeles has supplemented its draft class by adding 19 undrafted free agents to its roster.

Here’s the complete list of new Rams from Myles Simmons of TheRams.com: