The Bills have released running back Jonathan Williams, Ian Rapoport of NFL.com tweets. The move was unexpected, particularly since Williams was in line to be LeSean McCoy‘s primary backup. 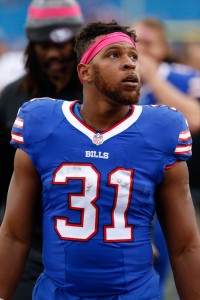 In 2016, his rookie campaign, Williams had only 27 carries in eleven games, but the former fifth-round pick out of Arkansas appeared to have a fair amount of promise. Of course, Williams was selected by the prior regime in Buffalo, so it could be that Brandon Beane and company simply were not as high on the ex-Razorback as their predecessors.

Nonetheless, it is a curious move, as Tolbert, Banyard, and Jones are veterans with limited upside, and Williams’ youth would have seemed attractive to a Bills team that is clearly in some form of rebuilding/retooling mode. It makes one wonder whether there were additional factors in Buffalo’s decision. Last summer, Williams was accused of driving while intoxicated, but he was found not guilty of that charge and he was not suspended by the league.