The search for a new defensive coordinator continues in New Orleans. According to ESPN’s Adam Schefter, the Saints have interviewed Michael Wilhoite for the vacancy (Twitter link). 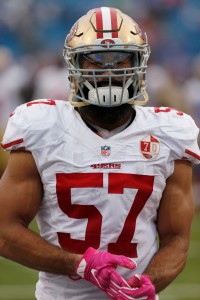 Wilhoite, 35, had a seven-year NFL career, including six with the 49ers. That stretch included an appearance in Super Bowl XLVII, and set up his coaching career, which began two years after his retirement. He served as a special teams assistant with the Saints in 2019; the following year, he assisted the defensive staff, so there is a degree of familiarity between him and the team. Wilhoite spent the 2021 campaign as the linebackers coach for the Chargers.

The news comes one week after longtime DC Dennis Allen was, as expected, chosen as the successor to Sean Payton. While the team has already made some additions to the offensive staff, the OC role is seen as being more of a priority, given Allen’s background. Still, the team is working to fill the position, having also met with Lions defensive backs coach/passing game coordinator Aubrey Pleasant last week. The former Rams assistant has been generating DC interest with his work dating back to 2017 in particular.

While Allen will surely be heavily involved in the Saints’ defense, the team is getting closer to hiring his replacement.

Now that free agent defensive tackle Dontari Poe has concluded his visits with the Dolphins, he’ll head home to consider offers, tweets Jason La Canfora of CBSSports.com. Poe has met with the Colts, Falcons, and Jaguars in addition to Miami, and will presumably sign with one of the clubs. Poe is PFR’s No. 2 free agent interior defender on the market, just behind Johnathan Hankins.

NaVorro Bowman is staying in San Francisco for the foreseeable future. The talented linebacker signed an extension earlier this week that will last through the 2022 season. The four-year extension is worth a reported $44MM (with $20MM guaranteed).

Bowman still had three years left on his contract, but the 28-year-old told Cam Inman of The Mercury News that he was intent on inking a long-term extension as soon as possible. Furthermore, the linebacker understood his standing in the organization, and he didn’t want his contract to trump that of former 49ers greats (including Patrick Willis).

“Out of respect for Pat, I took a little less and understood this was his team at the time,” Bowman said. “I’ve accomplished a lot since that time and made huge accolades.

“For me asking (now) for the deal, they understood why,” said Bowman, noting he never considered holding out of camp. “I knew it wasn’t a popular thing to do so with three years left. It’s basically about being fair. It shows how good of an organization they are to the players and fair for all the work I’ve put in.”
Let’s take a look at some more reactions to Bowman’s new contract… 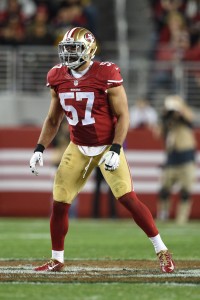 When teams assign first- or second-round tenders to their restricted free agents, like the Raiders did today with quarterback Matt McGloin, we’ll devote full news stories to those moves. But for the most part, RFAs around the league can expect to be either non-tendered or given a low-end tender worth $1.671MM. We’ll round up the players that fall into that group on Friday in the space below, with the latest updates added to the top of the list throughout the day….

A rebuilding 49ers season will end with another starter unavailable for Week 17 action after the team sent linebacker Michael Wilhoite to injured reserve, Matt Barrows of the Sacramento Bee reports.

San Francisco’s corresponding move comes in the form of backup running back Mike Davis being activated from IR-DTR.

Despite being an undrafted free agent from Division II Washburn, Wilhoite’s started 28 games for the 49ers the past two seasons.

The 29-year-old inside linebacker’s 2015 season, however, has been an uphill struggle, per Pro Football Focus. The advanced-metrics site rates Wilhoite as the league’s worst linebacker.

Davis played in five games this year, the most recent coming in Week 8 against the Rams. Prior to suffering a broken hand, the fourth-round rookie didn’t make much progress, gaining 24 yards on 25 carries as a backup. Per Barrows, Davis runs the risk of becoming the first running back since ex-Chiefs committee cog Donnell Bennett, who gained 24 yards on 27 totes in 2000, to average fewer than one yard per carry.

Here are Wednesday’s minor transactions from around the NFL, with additional moves added to the top of the list throughout the day: