The Raiders have been frequently mentioned as a possible landing spot for Adrian Peterson. However, Peterson’s interest level in joining Oakland is higher than Oakland’s interest level in bringing him aboard, a source tells Adam Caplan of ESPN.com (on Twitter). 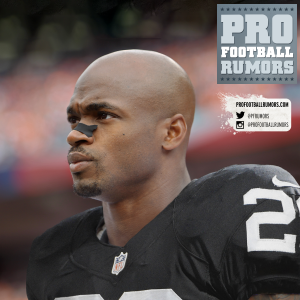 Peterson, my No. 2 ranked free agent running back and No. 35 ranked free agent overall (based on earning power), might not have the kind of market that he anticipated. The Seahawks are not presently interested in him and he might have to accept a deal with a modest base salary if he wants to join up with the Patriots. The Giants, who said they would “take a look” at Peterson, are not in the running.

All things considered, Peterson’s best bet might be to circle back to the Vikings. His popularity in Minnesota and history with the team could make them willing to pay him more than any other potential suitor.