The 49ers have agreed to sign wide receiver Pierre Garcon, according to Chris Mortensen of ESPN.com (on Twitter). It’s expected to be a three-year contract that pays about $23MM over the first two years with a ~$12MM signing bonus, Mike Garafolo of NFL.com tweets. League sources tell Mortensen that Garcon will earn $16MM in the first year of the contract. 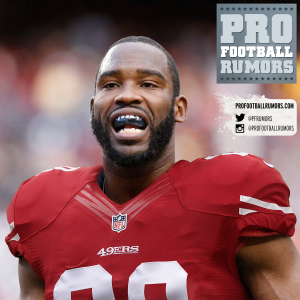 As one of the best wide receivers on the open market, Garcon was expected to fetch a nice payday for himself. However, it’s perhaps a little surprising to see him land $16MM in effectively guaranteed money. Garcon will turn 31 in August and he hasn’t been used to stretch the field in recent years with DeSean Jackson running the bulk of the deep routes.

I had Garcon ranked as the seventh-best available wide receiver on the market, behind Alshon Jeffery, Terrelle Pryor, Kenny Stills, Kenny Britt, DeSean Jackson, and Brandon Marshall. However, I slotted him ahead of Jackson and Marshall on my Top 50 list, which rates players by earning power. So far, that prediction is looking good. Marshall signed a two-year, $12MM deal with the Giants on Wednesday morning.

Garcon drew substantial interest on the open market but will reunite with former Redskins OC Kyle Shanahan. He had his best statistical year in Shanahan’s final season at the controls, going for 113 catches, 1,346 yards and five touchdowns in 2013.

Garcon played out his entire five-year, $42MM Redskins contract and proved not to be a Peyton Manning creation. His production increased at times after moving from Indianapolis to Washington. Garcon posted 1,000-yard seasons in 2013 and ’16 and surpassed 700 in both 2014 and ’15. Last season, Kirk Cousins‘ near-5,000-yard season included 79 Garcon receptions and three touchdowns.