Aubrey Pleasant continues to generate interest on the defensive coordinator market. After interviewing for the Vikings’ DC post, Pleasant met with the Saints about their new vacancy Wednesday, Steve Wyche of NFL.com tweets. 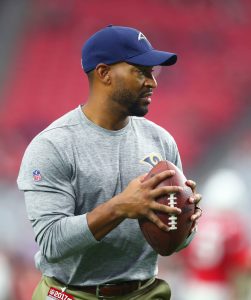 The Lions hired Pleasant as their defensive backs coach last year, but the former Rams cornerbacks coach has been on the DC radar for a bit. The Bengals interviewed him for the job that went to Lou Anarumo in 2019. Pleasant is the first name connected to New Orleans’ new DC vacancy.

Dennis Allen rising from his DC post to replace Sean Payton left a void, and the Saints are moving quickly to fill their staff. They added Doug Marrone on Wednesday and are planning to move longtime offensive coordinator Pete Carmichael to a new position. While New Orleans’ OC job now takes on greater importance, Allen’s presence minimizes the Saints’ DC post to some degree.

The Vikings appear to be zeroing in on Ed Donatell for their DC position, though Pleasant did work with expected Minnesota HC Kevin O’Connell with the Rams last season. Pleasant was the Rams’ corners coach during Sean McVay‘s first four Los Angeles seasons; that was the young assistant’s first position coaching gig.