The Cardinals announced a pair of roster moves today, confirming in a press release that they’ve re-signed tight end Darren Fells and added safety Shaun Prater to their roster. Fells had been an exclusive rights free agent, while Prater had been available on the open market. 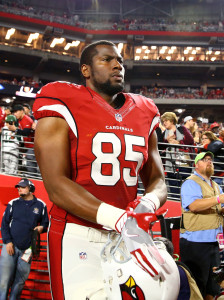 Fells, 29, took on a more substantial role in the Cardinals’ offense in 2015, establishing new career highs in receptions (21), receiving yards (311), and touchdowns (three). In the wake of John Carlson‘s retirement, the Cardinals signed Jermaine Gresham as a free agent, and expected continued development from 2014 second-rounder Troy Niklas, but it was Fells who led all Arizona tight ends in catches.

Because Fells only has two accrued NFL seasons under his belt, he was an exclusive rights free agent, meaning that if the Cardinals tendered him a contract offer, he’d have to sign it if he wanted to play in the NFL in 2016. Assuming Fells accrues a third season in ’16, he’ll be eligible for restricted free agency next winter.

As for Prater, the veteran safety spent time with multiple teams in 2015, and was eventually cut by the Broncos near the end of the regular season. The 26-year-old has appeared in 21 NFL games, but only saw any real action on defense during the 2013 campaign for the Vikings. Prater’s new deal with the Cardinals is likely a reserve/futures contract.