Hill will walk away from the NFL having spent his entire playing career with the Saints. New Orleans, however, cut its long-tenured pass catcher this offseason. The soon-to-be 31-year-old vet signed a one-year, $1.2MM Lions deal soon after.

While the Saints frequently shopped for pass-catching tight ends, bringing in the likes of Coby Fleener, Ben Watson and Jared Cook in attempts to fill the Jimmy Graham-created void, Hill stuck around. The 2013 UDFA out of Idaho State played in 117 Saints games, catching 116 passes for 1,071 yards and 15 touchdowns. Hill followed former Saints tight ends coach Dan Campbell to Detroit. Campbell’s team will now need to look at other solutions, having not drafted a tight end.

The Lions brought in Darren Fells for a workout earlier Tuesday. This certainly explains why the team is interested in another tight end. Detroit has first-round pick T.J. Hockenson signed through at least 2022, but Hill was poised to work as his backup. His exit could point to a near-future Fells addition. 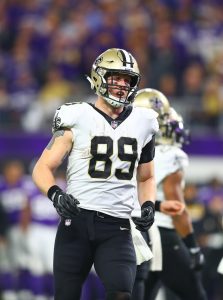 Campbell and Hill spent five years together with the Saints, where Campbell had served as assistant head coach and tight ends coach since 2016. Hill joined New Orleans way back in 2013, appearing in 126 games (regular season and postseason) during his eight years in New Orleans. While his offensive numbers have always been modest (116 career receptions, 15 touchdowns), Hill has made a career as a blocking tight end; Pro Football Focus graded Hill as the No. 4 overall run-blocking tight end in 2020. The veteran also has extensive experience on special teams.

The Saints moved on from Hill earlier this month, saving the team around $2.5MM in space. The 30-year-old was set to enter the final season of a three-year, $8.5MM deal he signed with New Orleans in 2018.

The Lions were in need of some extra tight end depth after releasing Jesse James earlier this week. Hill will likely slide into the depth chart behind starter T.J. Hockenson.

The Saints’ tight end group will boast a new look next season. With Jared Cook likely to depart as a free agent, the Saints also made the move Wednesday to cut veteran Josh Hill, Field Yates of ESPN.com tweets.

Still more than $60MM over the projected 2021 salary cap, the Saints will save $2.5MM by jettisoning Hill. One season remained on Hill’s deal. This move comes after the Saints adjusted David Onyemata‘s contract to create $4MM-plus in cap space.

Hill has been with the Saints for eight seasons, having only played in New Orleans as a pro. The Saints gave him a three-year, $8.85MM extension late in the 2018 season. New Orleans then signed Cook in 2019. His contract included a 2021 void year, pointing the veteran elsewhere after a two-year Saints stay.

The Saints continually brought in veteran receiving tight ends — from Coby Fleener to Ben Watson to Cook — while keeping Hill, who began his career when Jimmy Graham was still with the Saints. While Hill did not factor in much as a pass catcher last season, he remained a high-end run blocker. Pro Football Focus graded Hill as its No. 4 overall run-blocking tight end in 2020.

The Saints are the number one seed in the NFC, and they just doled out a contract extension while they wait to see who they’ll play in the divisional round of the playoffs. New Orleans is signing tight end Josh Hill to a three year extension worth $8.85MM, sources told Field Yates of ESPN.com (Twitter link).

While Hill isn’t a household name and doesn’t catch a ton of passes, he plays a big role in the Saints’ offense as a blocker. He’s played a tick over 62% of the offensive snaps this year, and also has the most receiving yards of his career. In the regular season he put up 16 catches for 185 yards and a touchdown, also matching his career high in receptions.

Hill just wrapped up his sixth year in the league, all with the Saints. The Idaho State product signed with New Orleans as an undrafted free agent back in 2013. The Saints clearly think very highly of him as they already matched an offer sheet for him when the Bears signed him as a restricted free agent in 2015, and $8.85MM is a lot of money for a blocking tight end. With Ben Watson set to retire after the season, it’s possible Hill will have an even bigger role as a receiver next year.

Saints tight end Josh Hill has a broken fibula, according to a source who spoke with Nick Underhill of The Advocate (Twitter links). Hill also has an ankle injury, though it is thought to be a high sprain and not a fracture. There is no word yet on Hill’s timetable for recovery, but it stands to reason that he will be placed on IR and shut down for the year.

Hill is technically listed as the No. 2 tight end on the Saints’ depth chart behind Coby Fleener, but he is a vital part of the team. This offseason, the Bears tried to swoop in on the restricted free agent by offering him a three-year, $7.5MM deal with $3.25MM in guaranteed money. Within to the week, the Saints matched the offer sheet and retained him.

In his four years with the Saints, Hill has averaged just 13 receptions per season. He may not move the needle in the passing game, but the Saints lean on him for his blocking ability.

The Saints are 5-7, behind the Falcons and Buccaneers (both 7-5) in the NFC South.

MONDAY, 10:39am: Ian Rapoport of NFL.com provides some specific details on Hill’s new contract, tweeting that it’s worth $7.1MM over three years, with a max value of $8.15MM via incentives. As noted below, it includes $3.25MM in guarantees.

FRIDAY, 3:13pm: The Saints have officially retained tight end Josh Hill, exercising their right of first refusal and matching the offer sheet he signed with the Bears on Tuesday, the team announced today (via Twitter). New Orleans will bring back Hill on the terms of that deal he signed with Chicago.

ESPN’s Mike Triplett and Adam Caplan provided several details on Hill’s offer sheet from the Bears earlier this week, reporting that the three-year deal can be worth up to $7.5MM, and features $3.25MM in guaranteed money.

Hill had already counted for $1.671MM on the Saints’ books for 2016, so if the first-year cap hit on his new deal is higher than that – as it almost certainly will be – it’s another contract New Orleans will have to squeeze under its cap. Having also confirmed a three-year deal for linebacker Craig Robertson, the team figures to announce a corresponding release or contract restructure soon, in order to create cap room for the new additions.

By bringing back Hill, the Saints have now signed three tight ends to new contracts this month — Coby Fleener inked a five-year deal to replace Ben Watson as the team’s No. 1 tight end, and Michael Hoomanawanui agreed to a three-year pact to return to New Orleans. Hill will join that duo to create plenty of pass-catching and blocking options for the Saints’ offense.

As for the Bears, they still have Zach Miller and Rob Housler among their tight end options, but the team may look to fortify the position in free agency and/or the draft.

Earlier this morning, Sean Payton broke some big news when he announced that he has signed a brand-new five-year contract through the 2020 season with the Saints. Payton’s contract has been a priority for New Orleans this offseason and they had plenty of motivation to get a deal done with several teams reportedly eyeing the 52-year-old coach.